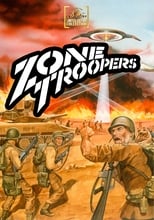 Release: Oct. 1st, 1985
Runtime: 1 hour, 26 minutes
American soldiers, led by The Sarge, are stuck behind Nazi enemy lines. As they make their way across the Italian countryside, they come across an alien spaceship that has crash-landed in the woods. The alien pilot is dead, but one of the ship's passengers is on the loose. As the GIs hunt down the alien by splitting into smaller groups, they're not only tracked by the Nazis, but also a whole host of other aliens come to save their stranded party.

0 Zone Troopers
Sort of a mindless & fun movie to watch. It is a good diversion from the "message" movies. You leave it feeling good....