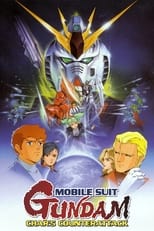 Release: Mar. 12th, 1988
Runtime: 2 hours, 4 minutes
In UC 0093 the Federation has recovered from its defeat and has created a new anti-colonial special forces unit to deal with rebel forces: Londo Bell. Elsewhere in space Char Aznable re-appears out of self imposed hiding with a declaration that he now commands his own Neo-Zeon movementand intends to force the emigration of Earth's inhabitants to space by bringing about an apocalypse.

We didn't find any linked discussions for this film. Here are the results of a quick search of possibly related threads:
1 Mobile Suit Gundam
If you like Pacific Rim and its sequel, then perhaps you may get excited that the very anime that influenced those two films, Mobile Suit Gundam will be getting the live-action treatment courtesy of L...
8 thriller. serial killer. girl main char?
Hi, I apologize for this is going to be very vague cause I saw this video clip on facebook and it disappeared before i could get much details. but here goes it started off with this very creepy loo...
2 What war-time movie? Minor char comes home to two asian courtesans.
There is a war time comedy - can't remember which war - where a military man, possibly retired expat, is a minor character. Anyway, the main character goes with the supporting character to his house a...
2 Zombie In A Penguin Suit
A friend of mine told me about this and of course I thought "Ah! A couple of college kids with a camcorder and a case of beer." I was pleasantly surprised....
9 A climber/mountaineer in yellow suit...
Hello, I wanna know a name of a movie that a scene is looks like a mountaineer in yellow suit walking in a snowing night then he steps on his knees and says like this : "I dont know if i can do ...