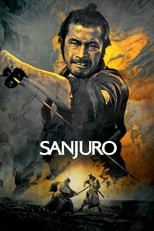 Release: Jan. 1st, 1962
Runtime: 1 hour, 36 minutes
Toshiro Mifune swaggers and snarls to brilliant comic effect in Kurosawa's tightly paced, beautifully composed "Sanjuro." In this companion piece and sequel to "Yojimbo," jaded samurai Sanjuro helps an idealistic group of young warriors weed out their clan's evil influences, and in the process turns their image of a proper samurai on its ear.

Iroquois Of course, with a director and cast as talented as the ones featured here (Tatsuya Nakadai pops up again, though he is almost unrecognisable due to this being the first role I've seen him in where he has a balding topknot instead of a full head of hair and a topknot - I guess that might be to distin....
READ REVIEW