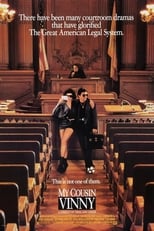 Release: Mar. 13th, 1992
Runtime: 2 hours
Two carefree pals traveling through Alabama are mistakenly arrested, and charged with murder. Fortunately, one of them has a cousin who's a lawyer - Vincent Gambini, a former auto mechanic from Brooklyn who just passed his bar exam after his sixth try. When he arrives with his leather-clad girlfriend , to try his first case, it's a real shock - for him and the Deep South!

We didn't find any linked discussions for this film. Here are the results of a quick search of possibly related threads:
14 Had to watch Pretty in Pink on a 4 hour drive with my cousin.
Is it just me or is Duckie the single likable and(or) interesting character in that entire film? I hated the main character, don't like Molly Ringwald as an actress, and all the other people were abso...
0 American High School movie with sexy cousin
Hi all ... I've been trying for ages to recall the name of a movie, with no luck. I remember it was an American high school romp, possibly dubbed? Anyway, one of the highlights was when the cousin ...
4 woman meets future husband in bookstore while engaged to his cousin
This is an older movie, but in color. Saw part of it on TV in 2003. The plot: This woman goes into a bookstore and buys a book entitled How to Please Your Husband, or something similar. This man see...

Gideon58 My Cousin Vinny is an entertaining and laugh-packed comedy confection that stars Joe Pesci as a New York tough who somehow barely passed the bar exam but has yet to try a case, who is asked to come down south to redneck country to defend his young cousin (Ralph Macchio)and his friend (Mitchell Whitf....
READ REVIEW