A Nightmare on Elm Street 5: The Dream Child 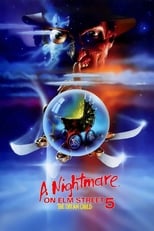 Release: Aug. 11th, 1989
Runtime: 1 hour, 29 minutes
Alice, having survived the previous installment of the Nightmare series, finds the deadly dreams of Freddy Krueger starting once again. This time, the taunting murderer is striking through the sleeping mind of Alice's unborn child. His intention is to be "born again" into the real world. The only one who can stop Freddy is his dead mother, but can Alice free her spirit in time to save her own son?

24 Nightmare on Elm Street 3: Dream Warriors
You don't even really have to be a fan of Horror to enjoy this film. Written by Frank Daranbont,(director of Shawshank Redeption), Wes Craven, and Chuck Russel. Directed by Chuck Russel(The Mask, Er...
2 Nightmare On Elm Street
The plot is very simple really, It all started with a middle aged man who would steal little children and do things to them. When the parents of elm street came awear of this they decided to take the ...
0 about the new nightmare on elm street dvd set
I got a question to ask about the second dvd set for the nightmare on elm street films does it include a bonus dvd like the first box set back in 1999 because I just bought it like earlier this year ...
4 A Nightmare on Elm Street
While I am curious to see the new movie, I'm sddened to hear how Wes Craven is so unhappy about it....
10 New Nightmare on Elm Street pictures
I’ve never been much of a horror fan but I do love the classic horror movies, and “Nightmare on Elm Street” sits on top of the heap when it comes to classic horror movies. Everyone knows they are rebo...