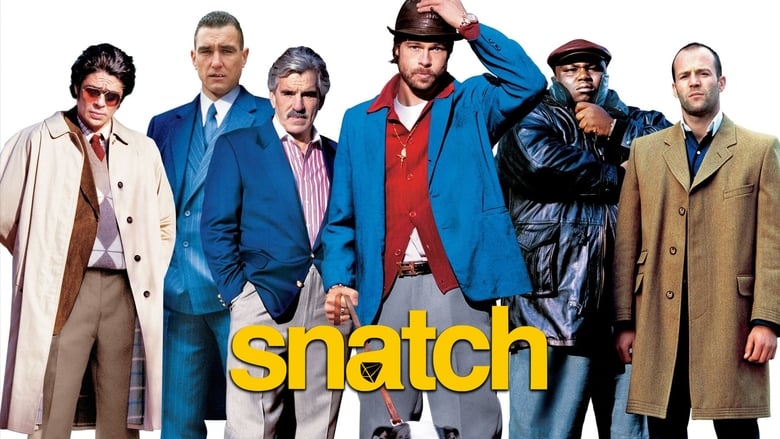 As a big fan of Ritchie's "Lock, Stock and Two Smoking Barrels" I was looking forward to watching Snatch, which is a similar film, taking place in London where various parties become involved in a series of intertwining events.

One difference in the films is the actors involved. Although stars such as Jason Statham and Vinnie Jones reappear after their first feature film performances in "Lock, Stock...”, Ritchie is able to add bigger stars to the cast, notably Brad Pitt and Benicio Del Toro.

If you’ve yet to see either “Snatch or “Lock, Stock…” then here is what to expect: a unique, high-paced film that is filled with a mixture of fun in the form of both comedy and violence, memorable characters and unpredictable and intertwining character stories. It is easy to compare his work to that of Quentin Tarantino, they are both able to achieve two of the most enjoyable crime films around so do not be surprised to here “Snatch” described as England’s very own “Pulp Fiction.

One of the main criticisms I have heard for this film is that it lacks in originality and ultimate relies on the same formula that made "Lock, Stock..." so good. Whilst I can understand why you may want to see something new from Ritchie I was still able to enjoy this film, if it was released as a one of its kind, say Ritchie's first feature film then I am sure it would have much more positive reviews.

again Ritchie gives us a variety of different characters, each one unique and memorable as they become involved in their own way, each having their own style and unique nicknames ranging from "Turkish" to "Brick Top". The cast is excellent, Del Toro and Pitt are great additions but possibly my favourite was Stephen Graham as Tommy, a slightly less intelligent character who is Turkish's partner throughout, a character who likes the criminal presence when compared to “Brick Top” but manages to hold his own as one of the funniest characters.

The plot and editing keep us on edge as the tales intertwine and take unexpected twists and turns throughout with some great editing work to create a whole host of different style scenes such as flight sequences from America to England, and fight scenes the viewers looking on in despair at the incapable Mickey (Brad Pitt) landing his friends in a whole lot of trouble.

It is this trouble that drives the plot at the centre of the film as Mickey, Turkish and Tommy find themselves deep in debt to the ruthless Brick Top, a criminal boss who feeds his victims his pigs. Of course nothing is straight forward as a series of other parties become involved in a chase for a missing diamond, originally belonging to Franky Four Fingers (Benicio Del Toro).

Snatch is a highly enjoyable and fun film, filled with an excellent cast and bizarre plot with many twists and turns. If you haven't seen "Lock, Stock..." then I think you'll enjoy it more as the plot twists and humour will seem more fresh. Snatch is an upgrade on "Lock, Stock..." where Ritchie gets to have fun upgrading each aspect of his films to get the most out of his extremely fun and extremely funny style. When you sit back, relax and watch this film then you don’t get much better for entertainment value.