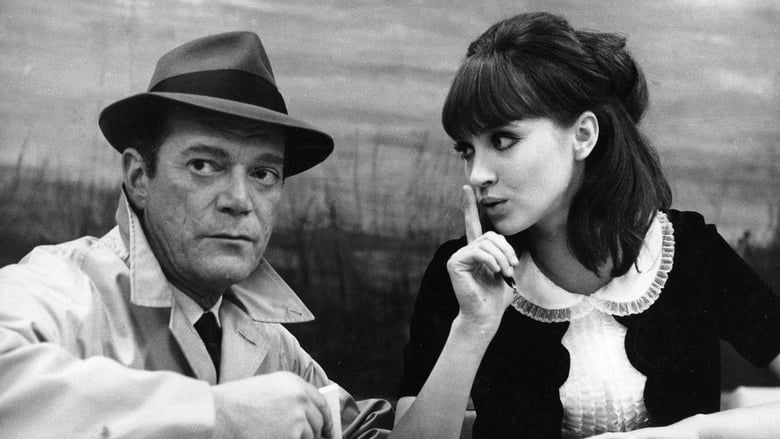 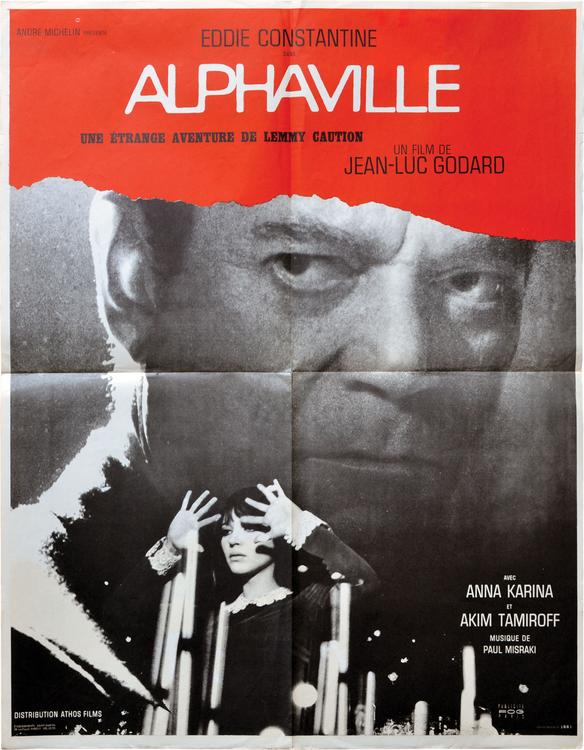 Well, I hardly even know where to begin with this. I'll try to keep it brief, but I doubt I will.
I chose this movie, not because of Godard's recent death, but essentially randomly. I was scrolling through my queues, saw its thumbnail, and thought, "it would be nice to throw a Sci-fi Art Film into the mix and you've never seen it", so I did. A few minutes in, I said to myself, "wait, is this Godard?" His name only flashes on the screen for a second, maybe less at the beginning of the film and I guess I was not focused on the words flashing on the screen, but it felt like him, specific shots and given the time. Oddly, this happened on September 13th, the day he died. Neat to have a little Godard Tribute here.
Agent Lemmy Caution is sent to Alphaville, a technocracy separate from "the Outlands" or "the Outer Countries", ruled and administered by the computer Alpha 60 and overseen by its creator, Professor Braun. His mission is to capture or if necessary kill, the Professor. Alpha 60 and the Professor have created a society based entirely upon logic where emotion is illegal and passion, love, creativity are suppressed. Normals accept this unquestionably, attend classes administered by Alpha 60 on how to think, and are executed if they show emotion. Yet no one seems too upset about this. Upon his arrival, he is exposed to a way of life he cannot understand or accept, especially because everyone around him does. But once he sees the pathetic underground for the expression of love and passion and it's explained to him that there are lots of people who are in misery in this society suppressing it, in what was probably one of the best and most thematically rich scenes... 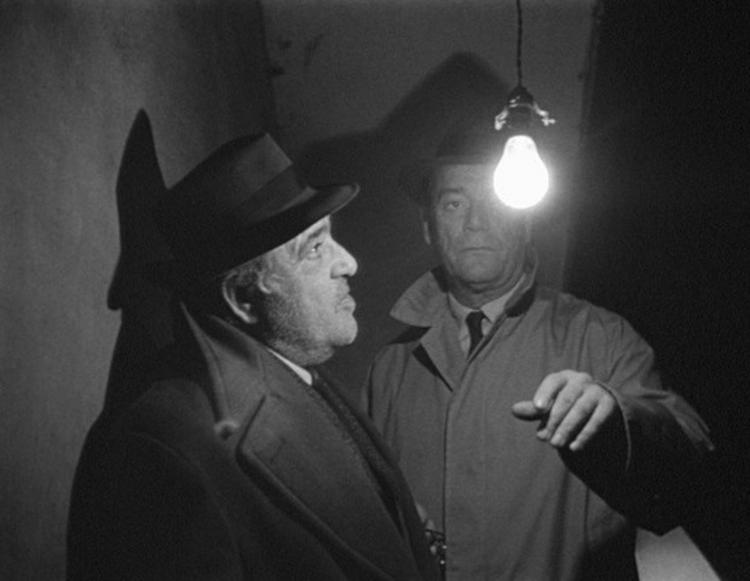 ... he is driven by his confusion and loathing to pursue his mission and put an end to this dystopia. The more he learns of this society, the more he hates it and wants to destroy it.

They've been condemned to death.
But what have they done?
They behaved illogically.

Godard does an amazing... what am I saying of course he does, he's Jean-Luc Godard, but I very much felt like I was watching something special the entire film, like I was almost smarter for having watched it (given that I understand the context of this film is 1965).
I thought it was incredibly interesting, reading about the making of the film, that Lemmy Caution was an existing Secret Agent character from novels and films of the novels and was played by this actor, Eddie Constantine, and Godard just decided to "write" a film (there was not so much a script) where Lemmy Caution goes into space to visit a technocratic society and be exposed to a perfect Logical Dystopia. There's not really a lot of precedent for this beyond the Speculative Fiction novels and short-stories that were around at the time.
Of course, with Godard, there is also the camera.
There are some wonderful shots in this film, including a tracking shot that lasts nearly four minutes (I had to go back and watch it because I didn't realize it was happening until it cut) and goes up a glass elevator and down the hall to a door, where it cuts to a wide shot from inside the room of him opening the door. Great shots of stairways and lots of glass and reflections, amazing use of modern architecture (in choice of building exteriors and interiors), and then just some really nice character shots. For example, Caution is led through Alphaville by Natatcha, Professor Braun's daughter and the interaction between she and Caution is an important framing for both the action and the themes of the film, but also for some great images. 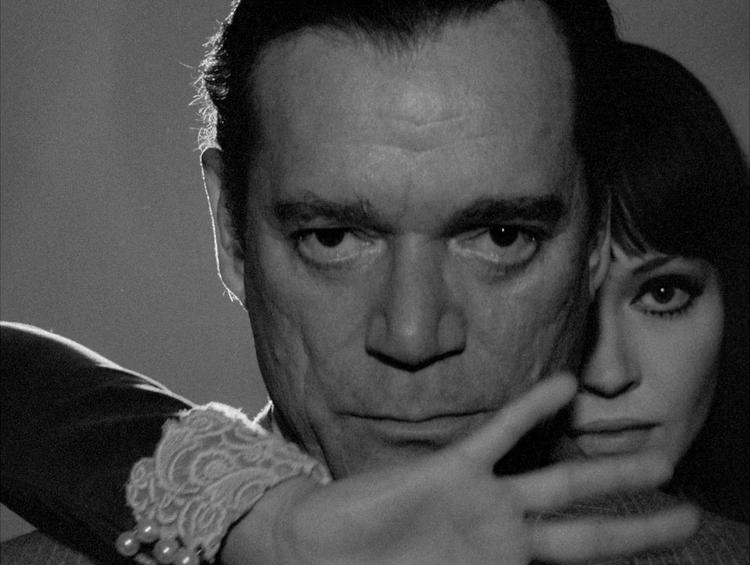 Natatcha, portrayed by Anna Karina, is wonderful and essential the both the narrative and themes of the film. She is the fully indoctrinated daughter of the creator of Alpha 60 and yet she feels something because of Caution... and she can't help herself but pursue it. This leads to some wonderful scenes about words and language and poetry and how important they are to the human soul, culminating in my other favorite moment from the movie, as well as some fantastic shots (Karina is insanely photogenic) like one where the camera focuses on her eye while a light goes on and off and her pupil dilates and contracts with the light while she recites poetry. 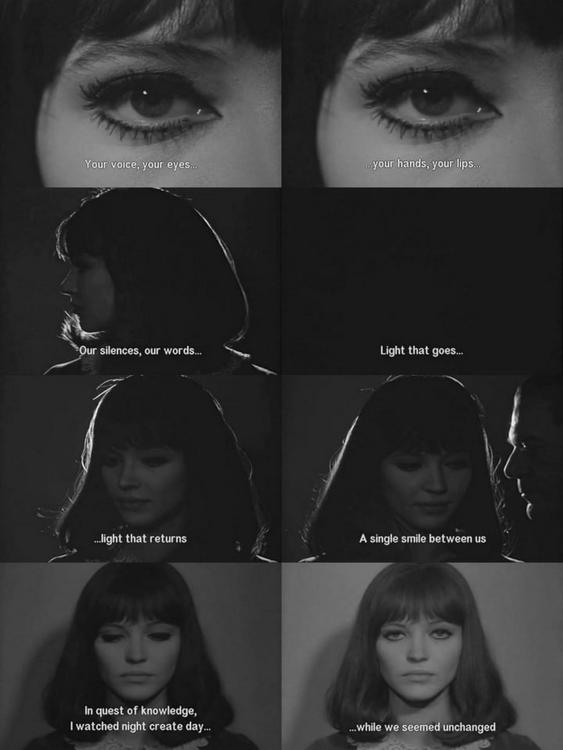 I think I am ready to go ahead and call this a masterpiece. I feel fairly close to how I felt about Last Year At Marienbad, which I think of as a Horror movie, by the way, for this "genre" film, that presages Blade Runner and other future/dystopian Noir films, yet this is also something that transcends genre, has a great deal to say about the soul and the human condition, and is a work of art that could be hanging in The Louvre. I don't know if this film is for everyone, but I am glad it exists and will selectively recommend it to people I think will appreciate it.
» More about Alphaville
» More reviews of Alphaville
» More reviews by Wooley