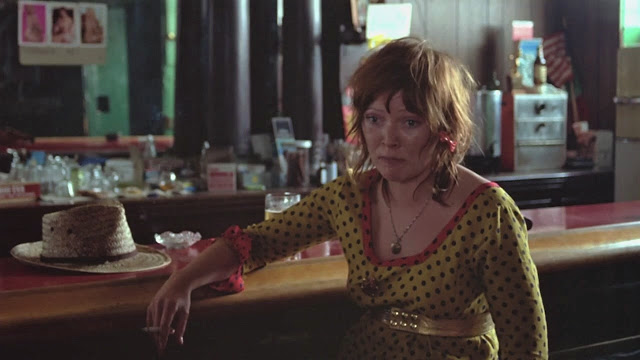 Gotta love the early 1970s for honest film dramas without pandering to the audience's emotions. That unique film making style would change after George Lucas's and Steven Spielberg's mega block busters hit the theaters in the later 1970s. But there was a time in the 70s when movie making was about something more than movies as amusement park rides...1972's Fat City by legendary John Houston is such a film.

Fat City is like a peak into the go-nowhere lives of people living hand-to-mouth and just trying to get through the day, while hoping for a better tomorrow. Tomorrow is fleeting and there's no grandiose mentor, no magic moments to lift these lost souls out of their doldrums. What we see isn't inspiring and it sure in the hell isn't uplifting, but it felt damn real.

A young Stacy Keach is perfectly cast as a has-been, small time boxer who goes through life where the currents take him. He's adrift without real direction. Susan Tyrrell is a 'train wreck of a bar fly' a juicer who's been drunk for years. Wholly crap! I believed she was an actual drunk and had degenerated into something that crawled out of the bottle and wants nothing more out of life than to stay at the bottom of that bottle.