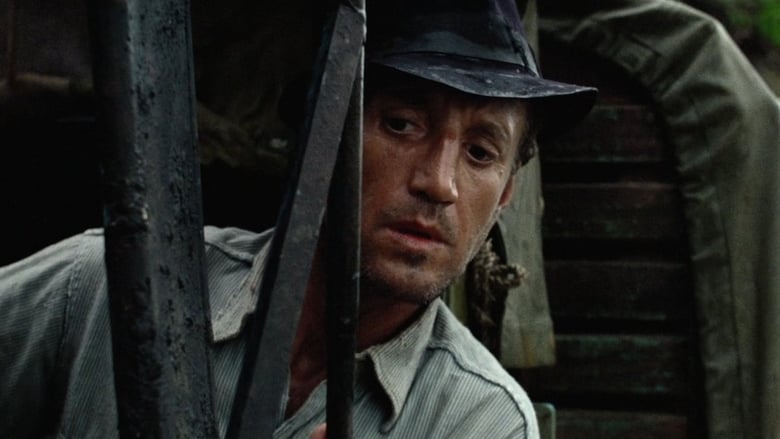 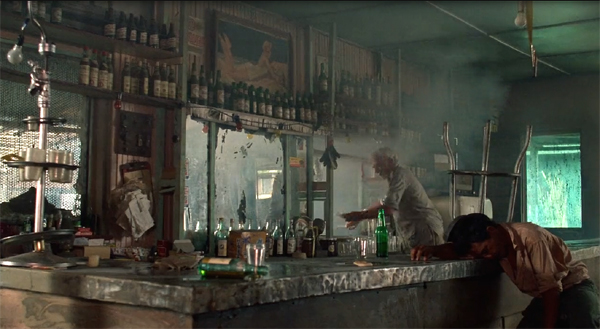 "Four unfortunate men from different parts of the globe agree to risk their lives transporting gallons of nitroglycerin across dangerous South American jungle."

This was amazing on so many different levels that I don't know where to begin!

Beautiful filmed! And I don't mean the lush jungle and I don't mean fancy camera work...I mean each scene starts with an establishing shot that looks like an award winning National Geographic photo. Being a long time still photographer myself, I noticed how special the camera shots were set up.

This is one of my favorites shots: 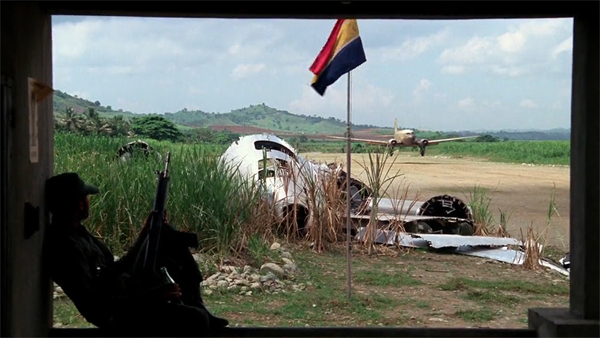 Look at how the camera is set up to shoot through a window that gives an illusion of a picture frame around the photo. I love that diagonal line that runs from the soldier in the foreground to the plane debris, to the plane in the background landing. That gives depth....Damn! that shot alone says so much. The soldier is kicked back casually drinking a soda pop while holding a gun... we can see the remnants of a crashed plane that no one has bothered to clean up...as another plane lands in this forgotten out of the way hell hole place.

The entire movie was like that and for me that was even better than the story. I was in a visual heaven!

The story itself was sophisticated. It sort of reminded me of The Guns of Navarone or The Dirty Dozen, where a rag tag band of misfits must go on a dangerous mission and risk their lives....but this is way different in that there are no heroes here and that's rare for films like this. The four men involved here are despicable. It's not like their rouges but still have a good side, they're murders and hardened thieves. The film makes an analogy that they've been sent to hell on Earth and there's no happy ending for these condemned men.

OMG! the special effects were huge, I don't recall ever seeing any practical effects done on this grand of scale. I mean they blow up an oil well with a monstrous fire ball!....and the trucks over the river on a swinging bridge, damn that was real! Real trucks, real bridge, real river in the real jungle! I've never seen anything like that before.

Everything is so impressive in this film. I could tell those jungles were real and not on a studio lot as I've been to the tropics and that's what they look like.

No CG here, and we'll never see a film made this big! It must have cost a fortune, the detail is amazing.