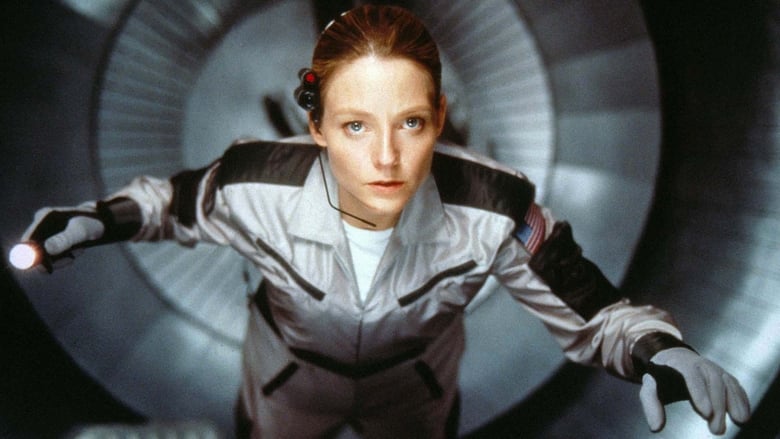 I hear there's going to be a Top 100 Sci-Fi Movies Countdown next year, so here's a movie I'd like you all to take into consideration.

The film is Contact and it's an old Jodie Foster and early Matthew McConaughey vehicle from the 1990's that is based on a book by the wildly popular astrophysicist/astronomer guy, Carl Sagan. A work of science fiction that he did. It is a movie that I have seen many times, the first time being at the movies in 1997 when it was released theatrically. Every time I watch it, I think it's terrific.

Well, of course it is. Robert Zemeckis of Back to the Future and Forrest Gump fame directed it. Oh, and Who Framed Roger Rabbit. And Cast Away, with Tom Hanks and the beach ball.

This is the story of Ellie Arroway, a brilliant astronomer who isn't taken seriously because she makes a living trying to listen to aliens in outer space through enormous satellite dishes. "E.T., phone home!" she cries out to the heavens, only to be brazenly ignored. She also seems to drink way too much beer, in my opinion, I noted. You don't always need a beer with your lunch, miss.

Her backstory is that she grew up in a house with a nerdy, but hunky father who introduced her to the cosmos and made her play around with a CB radio thing. Father suffered from some kind of medical condition, and because she didn't run ("Run, Ellie, Run!") and get the medicine in time after she hears him take a fall, he drops dead on her, and she was only 9 years old. Her mother had died years earlier (she never knew her), so she was basically an orphan.

Skip ahead back to the future. She meets Matthew McConaughey, who is a religious guy, a "man of the cloth without the cloth" mainly because he likes sex and couldn't join the priesthood, something like that. Jodie Foster, in a non-lesbian moment, has sex with him. He leaves her his phone number and, back to lesbianism, she doesn't call him -- and in fact, she moves away. She gets the Hell out of dodge. Mainly because her funding for searching for aliens gets taken away, so she has to go in search of new funding.

She finds it thanks to some creepy, glasses wearing John Hurt character named Mr. Hadden, a brilliant billionaire (millionaire?) eccentric who sort of becomes a pseudo father figure to Ellie. He believes in her and her mission to discover outer space aliens. Now what does all this sound like to you? It's The Silence of the Lambs, yet again. Hadden appears in only a few brief scenes, acts creepy, and helps Jodie Foster get what she wants out of life. He's the Hannibal Lecter of Contact. And we've already seen her as a little girl with no mother and a dying father. Miss Foster, I am seeing a pattern here with how you choose your screenplays to star in. Dead father, creepy paternal father figure substitute, avoids male characters that want to have sex with her = send this over to Jodie Foster, the producers say. An automatic "yes!"

But back to the movie -- so, she gets funding again. And this time... doot-doot-doot-doot-doot! That's right. The aliens call her and the message doesn't even go straight to the answering machine. She picks up... and suddenly, they're sending down blueprints to build a machine that will take Jodie Foster to deep space to visit them. Not only has she found aliens - she has found the Oprah Winfrey of aliens. They basically give her a car! She has to build it herself, but still, it's a car!

And then the next question is... what will Jodie Foster find once she gets to outer space? Will she even be the one to go, as Tom Skerritt is actually competing against her to get that free ride to light years away. Again with the man troubles. Matthew McConaughey enters the picture again... and so does another man from Ellie's past.

Contact. It's a brilliant movie. My review is a joke, but it's a great film. It's a story about the power of faith and the quest for truth. Don't miss it in your precious, valuable lifetime. Your only chance to see it, maybe.