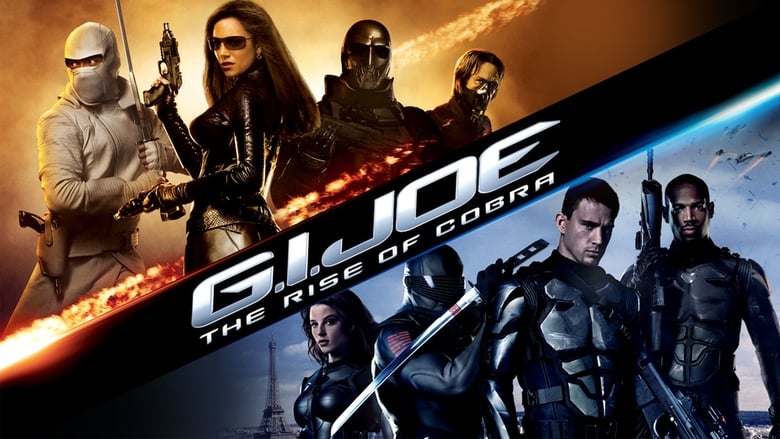 G.I. Joe: The Rise of Cobra

A pair of soldiers join forces with an elite commando unit that must recover an extremely dangerous weapon from a megalomaniac arms dealer.

Considering the contempt that sufficiently cultured film buffs have for overly expensive and fundamentally lightweight blockbusters, I do kind of wonder why Stephen Sommers doesn't get dragged into the firing line as often as more notorious contemporaries like Michael Bay or Roland Emmerich do. I guess it's because his blockbusters tend to be relatively inoffensive in comparison to the former's constantly-escalating obnoxiousness or the latter's trite sense of sentimentality. That doesn't automatically redeem G.I. Joe: The Rise of Cobra, which is yet another attempt to turn a popular toy into a flashy 21st-century live-action extravaganza. The G.I. Joe brand provides only the slightest window-dressing to an otherwise generic action blockbuster that sets up a conflict involving a set of high-powered warheads filled with matter-destorying nanomachines and the two sides - one bad, one good - fighting to get a hold of them whether for purposes of saving the world or holding it to ransom.

G.I. Joe: The Rise of Cobra may seem rather tolerable as far as contemporary CGI-heavy blockbusters go, but it's still prey to a lot of the usual faults that plague other films of its ilk. The plotting is fairly uninspired and haphazard (especially when it flashes back to various characters' back-stories) and isn't given much fleshing out by the actors involved. The film does need a viewpoint character or two around whom to build its fantastic world and logic, but making said characters be a combination of Channing Tatum's angst-ridden protagonist and Marlon Wayans' wacky comic relief is a decision that does have some promise but is executed rather poorly. The rest of the cast is thinly defined at best (case in point - the rest of the Joes) and badly defined at worst. I'd say there's an issue with the casting when the early presence of a certain recognisable actor ends up foreshadowing a sadly predictable reveal, and that's without getting into Christopher Eccleston's villain speaking in a high-pitched Scottish accent. Not even the conflict that arises from a hero and villain having been former lovers provides a satisfactory pay-off (nor do the multiple flashbacks that develop the complicated history between both sides' token ninja characters).

The weakness of the plot and characterisation does offer a silver lining of sorts; it does divert one's attention to the fact that the CGI on offer isn't bad enough to warrant heavily negative comments. There's something to be said for the relatively decent quality of it, especially when much of the screen ends up splashed with it in the form of elaborate backdrops (such as the underwater lair that only serves to remind me of Rapture from BioShock) or simple expository holograms. Even so, that still doesn't excuse the poorly structured action sequences that often depend on something as simple as the ninja characters' physical prowess to forcibly inject scenes with excitement and compensate for both physically and logically ridiculous developments. Said developments aren't even ridiculous in a fun way, such as Wayans' character frequently getting put through painful situations for very little reason at all other than humour - seriously, what is up with random vehicles in movies speeding towards characters and honking their horns without making any attempt to slow down or swerve out of the way? That's too distracting to even make its application work within its intended comical context. As a result, G.I. Joe: The Rise of Cobra is an acceptable way to pass time when you have nothing better to do and need some sort of distraction but there's nothing here that makes it worth seeking out voluntarily. Just because it looks fairly slick is no excuse for its many other shortcomings.