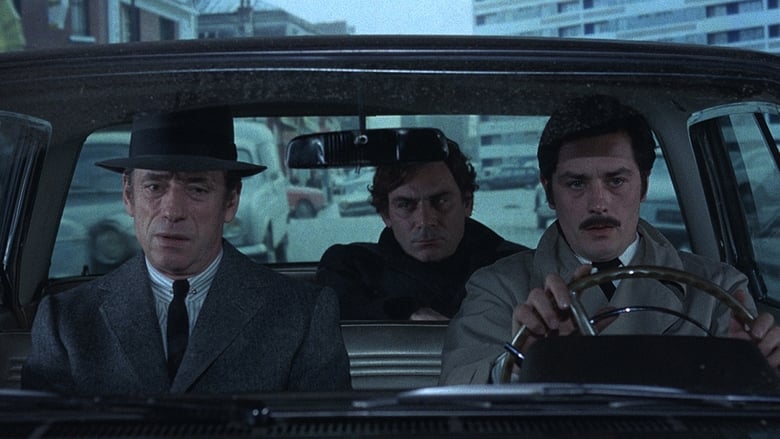 There are many reasons to fall in love with a movie. Maybe you're able to relate to the characters on a deeply personal level. Maybe the movie stimulates you intellectually or emotionally. Maybe, like a ride at a carnival, you find the movie enormously entertaining and fun. Or maybe, in the case of Le Cercle Rouge, the movie is so effortlessly cool, so assured and stylish and elegant in its approach, that you feel more like a badass just for watching it.

In many ways, Le Cercle Rouge reminds me of what the Italians did to the Western. By transporting a genre that was so traditionally American across the pond and filtering it through the eyes of Italians like Sergio Leone, the old-western mythology was heightened, the gunslinger was transformed into an almost mythic figure, the duels were elevated to epic showdowns of skill and tension and suspense; slap an iconic Ennio Morricone score onto the proceedings and you've just transformed a decades-old genre into something completely new and game-changing. Melville, by approaching the material from a different heritage and culture and adding his unique perspective to the traditionally American tropes, did the same thing to the old-school noir and gangster flicks typically seen in the 40's and 50's. The result is something that looks familiar from a distance, with its fedoras and trench coats and scenes of people being held at gunpoint or meeting at nightclubs, but on closer examination is wholly original. This is pure cinema through and through. If the Italians' re-imagining of the Western was called a Spaghetti Western, then I guess Le Cercle Rouge could be called a . . . Well, I don't know what kind of food the French are famous for, so I'll just call Le Cercle Rouge an Eiffel Noir, in reference to the Eiffel Tower.

In keeping with the Spaghetti Western comparisons, Alain Delon is to Melville what Clint Eastwood is to Sergio Leone: a reverential badass of few words and fewer emotions, who is magnetic, mysterious, compelling and charismatic. The same can be said for Volontť's escaped criminal and Montand's demon-ridden sharpshooter. It's impossible to imagine these characters performing the kind of mundane tasks that you and I do every day. They exist solely to look cool, smoke cigarettes, plan heists and evade the cops. And speaking of cops, Bourvil's veteran of the police force feels more villainous than the criminals, willing to extort and blackmail and break any laws that stand between him and the so-called "bad guys." This isn't black vs white, but gray vs. gray: a morally ambiguous world where the line between right and wrong is non-existent. Every character, regardless of which side of the law they preside, is tormented in some aspect.

The characters rarely get in a hurry, performing their duties with painstaking precision and finesse, which is indicative of the movie's leisurely pace. Scenes unfold slowly and quietly. The musical score is rarely present and operates at the level of a whisper when it is. This works to the movie's benefit, especially during the phenomenal heist sequence, which lasts nearly thirty minutes and is filmed in almost complete silence. Most directors would speed up the proceedings and slap a song over the scenes and feature the actors talking to one another as they make off with the jewels, but these characters are professional criminals, and Melville shows every step of their process, emphasizing the tension until it is almost unbearable. I was so caught up in the heist sequence that I had to remind myself to breathe during it, fearing that I would somehow set off an alarm if I made too much noise. The performances, the cinematography, the shot composition, the editing, the minimal use of dialogue--- everything about this movie feels like the work of a consummate artist. Le Cercle Rouge oozes coolness from every pore of its celluloid being. It is my first encounter with Melville. I guarantee that it won't be my last.