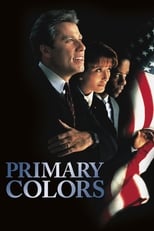 Release: Mar. 20th, 1998
Runtime: 2 hours, 23 minutes
In this adaptation of the best-selling roman ŕ clef about Bill Clinton's 1992 run for the White House, the young and gifted Henry Burton is tapped to oversee the presidential campaign of Governor Jack Stanton. Burton is pulled into the politician's colorful world and looks on as Stanton -- who has a wandering eye that could be his downfall -- contends with his ambitious wife, Susan, and an outspoken adviser, Richard Jemmons.

We didn't find any linked discussions for this film. Here are the results of a quick search of possibly related threads:
10 Mario Bava: All the Colors of the Dark.
Mario Bava All the Colors of the Dark The link and specifications on I have been saving my pennies for a couple months now on purchasing this nearly $300 book. Tomorrow, I send those pennies off,...
15 Rate that Movie: Three Colors: Blue
THREE COLORS: BLUE (Krzysztof Kieslowski, 1993) MoFo Rating: 8.2 (14 votes) ...
24 Colors Reviews Stuff Out of Boredom
Penguins of Madagascar. Directors: Eric Darnell, Simon J. Smith Writers: Micheal Colton, John Aboud, Brandon Sawyer, Alan Schoolcraft, Brent Simons, Eric Darnell, Tom McGrath Voice cast:...
4 Kieslowski's Three Colors Trilogy... Which film is better?
In the past month I have watched Krzyzstof Kieslowski's second & third films from the trilogy, but I have yet to see the first installment. For those of you that don't know, theres: Trois Couleu...
0 Primary (d. Robert Drew, 1960)
Primary Robert Drew's Primary is an interesting little film. I don't think I've ever seen something strive to be so painstakingly objective. This was, of course, partly the point [if not the wh...

Gideon58 John Travolta plays Jack Stanton, an amiable and charismatic governor who has begun a campaign to become POTUS when news of an arrest in his past, as well as an extra-marital affair come to light, which motivates Jack's campaign staff to beat the press to any further dirt by hiring a special investi....
READ REVIEW