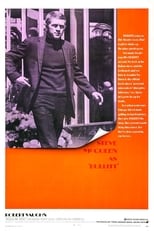 Release: Oct. 17th, 1968
Runtime: 1 hour, 53 minutes
Senator Walter Chalmers is aiming to take down mob boss Pete Ross with the help of testimony from the criminal's hothead brother Johnny, who is in protective custody in San Francisco under the watch of police lieutenant Frank Bullitt. When a pair of mob hitmen enter the scene, Bullitt follows their trail through a maze of complications and double-crosses. This thriller includes one of the most famous car chases ever filmed.

We didn't find any linked discussions for this film. Here are the results of a quick search of possibly related threads:
7 Bullitt a Peter Yates Film
'There are bad cops and there are good cops-and then there's Bullitt.' Bullitt 1968/COLOR/126MIN/14A/WARNER D Peter Yates Cast Steve McQueen Robert Vaughn Jacqueline Bisset Robert...

JayDee Conclusion Despite being a touch slow moving at times (do we really need to see Bullitt buying groceries or his personal moments with Bisset?) McQueen and the car chase alone make it a good watch, even if the rest of the film never really lives up to said car chase.
READ REVIEW

Omnizoa I'm really not sure why the short car chase gets so much promotion either, car chases are generally pretty boring given it's 99% intercutting shots of two cars driving real fast and 1% hilariously fake panic zoom to explosion.
READ REVIEW

Gideon58 The camerawork actually made me dizzy and I'm pretty sure that this chase was the only reason the film was set in San Francisco, whose hills made a perfect canvas for this awesome car chase, which started with the bad guys chasing Bullitt, but that was quickly reversed.
READ REVIEW