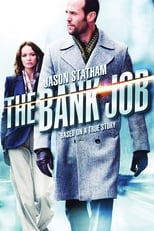 Release: Feb. 28th, 2008
Runtime: 1 hour, 52 minutes
Terry is a small-time car dealer trying to leave his shady past behind and start a family. Martine is a beautiful model from Terry's old neighbourhood who knows that Terry is no angel. When Martine proposes a foolproof plan to rob a bank, Terry recognises the danger but realises this may be the opportunity of a lifetime. As the resourceful band of thieves burrows its way into a safe-deposit vault at a Lloyds Bank, they quickly realise that...

We didn't find any linked discussions for this film. Here are the results of a quick search of possibly related threads:
0 The Bank Job
Saw a trailer for this today at the cinema. Looked alright too ...
19 The Bank Job
This is the latest British film to hit the box office and has the potential to go big. Jason Statham and David Suchet are the only well known actors yet this film still excels. The plot focuses on a s...

christine Being written by Clement and La Frenais guarantees some comedy, but the film does have it's violent moments and probably suffers a bit from not quite handling that shift between light and dark - it's a little clunky in that respect.
READ REVIEW

The Gnat The acting is solid, and the story is fairly entertaining, so I wouldn't avoid it if you like the British crime sort of film, but I also wouldn't call it a film that is a must see.
READ REVIEW