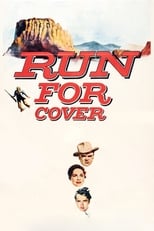 Release: Apr. 29th, 1955
Runtime: 1 hour, 33 minutes
Western that starts when a man (Matt Dow) is mistaken as a train robber. After the town's sheriff shoots the kid he's riding with, Dow clears his name and ends up as the new sheriff. He romances a Swedish woman and settles in to a peaceful life only to find that the boy has a few secrets of his own.