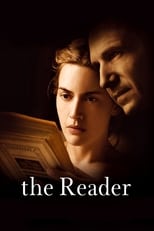 Release: Dec. 10th, 2008
Runtime: 2 hours, 4 minutes
The story of Michael Berg, a German lawyer who, as a teenager in the late 1950s, had an affair with an older woman, Hanna, who then disappeared only to resurface years later as one of the defendants in a war crimes trial stemming from her actions as a concentration camp guard late in the war. He alone realizes that Hanna is illiterate and may be concealing that fact at the expense of her freedom.

We didn't find any linked discussions for this film. Here are the results of a quick search of possibly related threads:
0 The Reader
Academy Award winning producer Scott Rudin has pulled his name off The Reader, the upcoming Stephen Daldry (The Hours) drama starring Kate Winslet that’s set to be released December 12. The announc...
4 The Reader
<--- Spoilers below ---> I was pretty shocked when I saw The Reader. The story is told from the point of view of Michael (Ralph Fiennes as an adult). In the movie Michael comes in contact w...
1 about The Reader
I am sure I have already seen a version of The Reader long before this Kate Winslet film was made. And I think it was in German, black and white. Possibly a TV adaptation. I cannot find any data about...
3 Doubt regarding Reader 2008 film
In Reader 2008 movie, why sarah cant tell that she is illiteracy so she cant be imprison for life time?...

Lennon I can tell you that this movie just isn't good. It was just plain ol' boring..
READ REVIEW