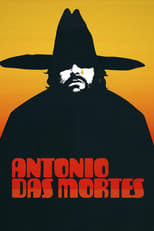 Release: May 20th, 1969
Runtime: 1 hour, 40 minutes
A new incarnation of Cangaceiro bandits, led by Coirana, has risen in the badlands. A blind landowner hires Antônio to wipe out his old nemesis. Yet after besting Coirana and accompanying the dying man to his mountain hideout, Antônio is moved by the plight of the Cangaceiro’s followers. The troubled hitman turns revolutionary, his gun and machete aimed towards his former masters.

We didn't find any linked discussions for this film. Here are the results of a quick search of possibly related threads:
4 Looking for some independent theatres in San Antonio
If anybody lives in San Antonio, or has lived there, do you know of any of these 'independent theatres' I keep hearing about, the ones that show classic films and whatnot. Thank you....
5 Saw This Antonio Banderaz Movie I Can't Remember Name
Ok, so today I was watching some Drama/Gangster movie with Antonio Banderaz and he was some teacher trying to teach these kids in detention how to dance and I remember a scene where a kid gangs up on ...