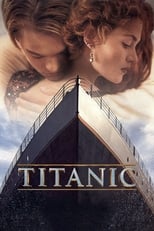 Release: Nov. 18th, 1997
Runtime: 3 hours, 14 minutes
101-year-old Rose DeWitt Bukater tells the story of her life aboard the Titanic, 84 years later. A young Rose boards the ship with her mother and fiancé. Meanwhile, Jack Dawson and Fabrizio De Rossi win third-class tickets aboard the ship. Rose tells the whole story from Titanic's departure through to its death—on its first and last voyage—on April 15, 1912.

We didn't find any linked discussions for this film. Here are the results of a quick search of possibly related threads:
57 Titanic
Well it's been a while, 4 years now I guess. Titanic, the most commercially successful film of all time was seen by everyone. The first couple of months were bliss for James Cameron. The critics ad...
9 Titanic...
To whom it may concern: I am proud to say that I have never seen all of Titanic. I only saw the "good" scene and when the ship's sinking and such... which in itself is only 15 minutes, cu...
25 Do you like Titanic 2?
Hey i was watching titanic 2 and i thought to myself what a bad movie... everything was so cheap and the acteurs was so bad.... i would love to know if its anyone outthere that like this movie .......
17 Titanic to be re-released in 3D
3-D conversion and 2012 re-release During the 2009 San Diego Comic-Con, Cameron announced that Titanic is in the process of being converted into 3-D and re-released in theaters at some point in 2011.&...

The Rodent It's a touch cheesie at times and very girlie when the love connection gets itself going, and the backdrop of Titanic will give the audience a clear sense of where the film is going, both in plot, and in storyline, but it still doesn't fail to thrill whoever is watching.
READ REVIEW

Omnizoa Let's get down to brass tacks, we all know what the Titanic is and we all know that James Cameron's Titanic took the concept and glommed a romance story onto it creating one of the most extraordinarily profitable movies ever made.
READ REVIEW

aronisred But after this movie he realized that he struck gold and he changed his course of his career into becoming this superstar who is trying to make movies that are epic and prestigious but also trying to get Oscar for himself and his movies and maintain his box office draw.
READ REVIEW