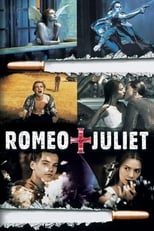 Release: Nov. 1st, 1996
Runtime: 2 hours
In director Baz Luhrmann's contemporary take on William Shakespeare's classic tragedy, the Montagues and Capulets have moved their ongoing feud to the sweltering suburb of Verona Beach, where Romeo and Juliet fall in love and secretly wed. Though the film is visually modern, the bard's dialogue remains.

3 Romeo + Juliet SE DVD-ROM problem
I tried to access the script to screen however I cannot seem to find a play button to play the video. I can view the script/play though. Can anybody tell me where the buttons are? And how do I sto...
1 William Shakespeare's Romeo + Juliet
I'm a big Baz Luhrmann fan now. Moulin Rouge was so great, it made me seek out Strictly Ballroom, which is even more extraordinary. But my relationship with Baz started on a sour note with his versi...

Gideon58 Baz Luhrmann did his own flashy re-thinking of The Great Gatsby back in 2013, but long before that, he took on Shakespeare with his eye-popping interpretation of Romeo + Juliet, the ultimate story of star-crossed lovers that Luhrmann made palatable for the masses thanks to a contemporary setting, an impressive cast, and Luhrmann's accustomed cinematic razzle dazzle.
READ REVIEW

MovieMad16 Claire Danes really shines as Juliet in this film as the infamous story of two star crossed lovers destined to be together.
READ REVIEW