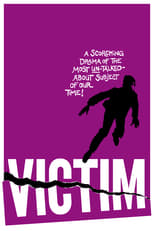 Release: Aug. 1st, 1961
Runtime: 1 hour, 40 minutes
In early 1960s London, barrister Melville Farr is on the path to success. With his practice winning cases and a loving marriage to his wife, Farr's career and personal life are nearly idyllic. However, when blackmailers link Farr to a young gay man, everything Farr has worked for is threatened. As it turns out, Farr is a closeted homosexual -- which is problematic, due to Britain's anti-sodomy laws. But instead of giving in, Farr decides to fight.

0 Deceased Bikini Victim Scene
The scene showed a deceased girl lying on top of a bed. She looked like she was about a teenager or maybe younger or older? She had white skin, had yellowish? hair, and was wearing a bikini. I don...
4 Films that there is a woman victim and there is two scenes I remember
There is one scene of each two movies I remember:. 1. The only scene I remember is where the girl with pigtail hair was try to call a police but it was too late and she killed by the red hooded man...
7 A pedophile killed by victim’s mother in courtroom
Hi This is a movie where a little girl is waiting for her mother to pick her up from school. She is approached by her male teacher and after having waited more than usual she accepts, he is later s...
3 Which movies are the biggest victim of Hype Backlash?
Basically, a movie was underhyped at first, but it eventually gained a ton of hype as being an underrated movie to the point where it became overhyped. One example of this was Disney's Frozen. Whe...
3 A woman rape victim becomes a gunslinger and get revenge
Years ago I saw a movie on TV about a woman in the old West who gets raped by a gang of thugs. An experienced gunman shows her how to shoot a gun, and she goes after the thugs and shoots them. I forgo...