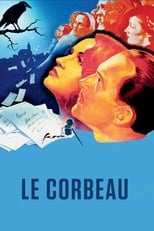 Release: Sep. 28th, 1943
Runtime: 1 hour, 32 minutes
Remy Germain is a doctor in a French town who becomes the focus of a vicious smear campaign, as letters accusing him of having an affair and performing unlawful abortions are mailed to village leaders. The mysterious writer, who signs each letter as "Le Corbeau" (The Raven) soon targets the whole town, exposing everyone's dark secrets. This allegorical film was highly controversial at the time of its release, and was banned in France after the Liberation.

20 The Raven (2011)
The Raven (2011) Starring: John Cusack. Director: James McTeigue (Ninja Assassin, The Invasion, V For Vendetta) A fictionalized account of the last days of Edgar Allan Poe's life, ...
1 Gang that identified each other with a crow /raven tattoo
I watched a movie a long time ago on TV at a hotel that was about a gang with a tattoo as identification (i think it was a black bird eg. a crow or raven) that did a lot of assorted crimes, i think on...

Citizen Rules After WWII the free French claimed this film made by a German film company in occupied France was demeaning to the French people and the French resistances....Nah, that's not what the film is doing.
READ REVIEW