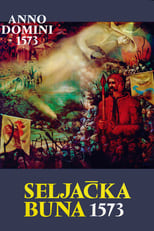 Release: Nov. 14th, 1975
Runtime: 2 hours, 25 minutes
Europe in second half of 16th century was very rough place to live. Peasants of Slovenia and Croatia had even rougher times because of the constant threat of Turk raids and being taxed to death in order to provide defence against the Turks. But, the worst things were arrogant local feudal lords led by Franjo Tahi who were oppresing the common folk. All that led to the great peasant revolt of 1573. The movie is made for the 400th anniversary of the event.