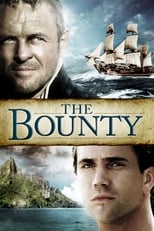 Release: May 4th, 1984
Runtime: 2 hours, 12 minutes
The familiar story of Lieutenant Bligh, whose cruelty leads to a mutiny on his ship. This version follows both the efforts of Fletcher Christian to get his men beyond the reach of British retribution, and the epic voyage of Lieutenant Bligh to get his loyalists safely to East Timor in a tiny lifeboat.

We didn't find any linked discussions for this film. Here are the results of a quick search of possibly related threads:
5 The Bounty Hunter
I just stummbled across this trailer and the film looks pretty funny. The Bounty Hunter is an upcoming film directed by Andy Tennant, starring Jennifer Aniston and Gerard Butler...
4 Bounty Killer
I have just seen a trailer for this film, Bounty Killer and im looking forward to watching it when its released. Looks pretty badass. Bounty killers compete for body count, fa...
1 the bounty (1984)
ONE OF THE BEST movies of the 80s, gripping,atmospheric, and a sublime soundtrack that sets the mood from the opening scenes, magnificent stuff, have your say....