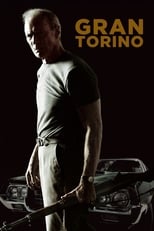 Release: Dec. 9th, 2008
Runtime: 1 hour, 56 minutes
Widower Walt Kowalski is a grumpy, prejudiced, tough-minded, unhappy, old, Korean War veteran who can't get along with either his kids or his neighbours. His prize possession is a 1972 Gran Torino he keeps in mint condition. When his neighbour, Thao—a young Hmong teenager under pressure from his gang member cousin—tries to steal his Gran Torino, Walt sets out to reform the youth and takes steps to protect Thao and his family from the gangs that...

We didn't find any linked discussions for this film. Here are the results of a quick search of possibly related threads:
0 Gran Torino
Directed by: Clint Eastwood Starring: Clint Eastwood, Cory Hardrict, John Carroll Lynch Theaters: December 17, 2008 Disgruntled Korean War vet Walt Kowalski (Eastwood) sets out to reform his neighbor...
15 Gran Torino
This movie is worth viewing... Oddly enough I would walk past it in video stores, as if I was walking past a tombstone with Clints face on it... I just saw him as a old dried up actor far past his pri...

mark f By the time the film's poetic final scene plays out over the closing credits and title song, it's obvious to the more astute members of the audience that Eastwood and Walt both did the right thing.
READ REVIEW

NO RATING
christine Walt taking on the shy Thao's education into Walt's world of working men, with the emphasis on macho men, forms the base of the film and has its laughs as well as pathos.
READ REVIEW

spudracer If there's ever a movie that captures the goodwill and wholeheartedness of the elderly, one need look no further than Gran Torino and Walt Kowalski. .
READ REVIEW
View All (6)