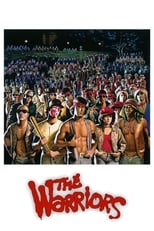 Release: Feb. 8th, 1979
Runtime: 1 hour, 33 minutes
Prominent gang leader Cyrus calls a meeting of New York's gangs to set aside their turf wars and take over the city. At the meeting, a rival leader kills Cyrus, but a Coney Island gang called the Warriors is wrongly blamed for Cyrus' death. Before you know it, the cops and every gangbanger in town is hot on the Warriors' trail.

We didn't find any linked discussions for this film. Here are the results of a quick search of possibly related threads:
27 The Warriors
"They are 100,000 strong" A great tagline for an even better movie. I was wondering, has anyone else seen this movie? I rented it for the 15th time today.. and I can say NOTHING but good ...
17 Dynasty Warriors
The Koei Tecmo video game series Dynasty Warriors is getting a live action film treatment and as a matter of fact, filming is already going on in China. The games, based on the classic Romance of t...
2 Was Laurence Fishburne in The Warriors?
Leader of The Panzers Is this a young LF? I had a friend of mine ask me about it and I can't find anything on this actor in the picture apart from a few speculations and a website saying he &...
13 Movie with all female warriors
Hello Everyone! Im looking for a movie from around the 80's maybe where a man and a woman arrives to an island/cave system where only females living and they only use men to get pregnant. The femal...
24 Nightmare on Elm Street 3: Dream Warriors
You don't even really have to be a fan of Horror to enjoy this film. Written by Frank Daranbont,(director of Shawshank Redeption), Wes Craven, and Chuck Russel. Directed by Chuck Russel(The Mask, Er...

JayDee At the time of its release the film proved controversial as it was accused of glorifying gangs and inciting gang violence.
READ REVIEW

Iroquois The Warriors and their Native American-themed vests look mild compared to many of the other gangs; The Baseball Furies are probably the most iconic characters in the film with their bizarre combination of baseball uniforms and brighty-coloured face-paint, though other gangs include the all-female Li....
READ REVIEW

Jack1 The Warriors, the protagonist gang of the film, are framed, and they must make their way home to Coney Island.
READ REVIEW
View All (5)