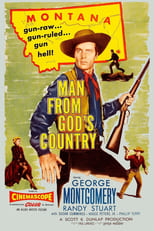 Release: Feb. 9th, 1958
Runtime: 1 hour, 12 minutes
Dan Beattie gives up his lawman job to move further west and rejoin his old war buddy Curt Warren in the town of Sundown. At first mistaken for a railroad agent by Beau Santee, a Sundown businessman who wants to keep the railroad away from his town, Dan is nearly killed by Santee's henchman, Mark Faber. Dan discovers that his old pal Curt works for Santee. Even after learning Dan's true identity, Santee considers him trouble and plots to get rid...