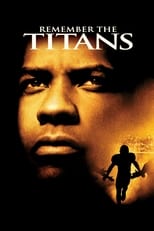 Release: Sep. 29th, 2000
Runtime: 1 hour, 53 minutes
After leading his football team to 15 winning seasons, coach Bill Yoast is demoted and replaced by Herman Boone – tough, opinionated and as different from the beloved Yoast as he could be. The two men learn to overcome their differences and turn a group of hostile young men into champions.

We didn't find any linked discussions for this film. Here are the results of a quick search of possibly related threads:
2 Remember The Titans
I have no love for American football. The sport is clearly a hybrid of rugby and football and yet it is neither. I regard this obscure game as an activity, designed by Americans for the specific compr...
1 Titans (DC Universe)
Titans, the live-action version of Teen Titans, premiered this past weekend on the new DC Universe streaming channel. I actually like the premise. It does for Teen Titans what Riverdale does for the A...
0 Remmember the Titans
I loved this movie with Denzel Washington in it. It is based on a true story about a black football coach comes to a pretty discriminating (sp?) towards blacks city. he is hired to take over the all...
10 Clash of the Titans 2
Sequel It's been stated that a sequel will be developed. Director Louis Leterrier will not come back to direct but will be an executive producer on the project.Clash of the Titans II has a tentative 2...
14 Teen Titans
I know the Teen Titans live action movie will be released in 2009, but the cast has not yet confirmed. Directed by: Tim Burton The good guys- Richard Grayson/Robin: Zac Efron Victor Stone/Cybo...

The Gnat Overall Grade: B Acting: B+ Story: B Audio/Visual: .
READ REVIEW