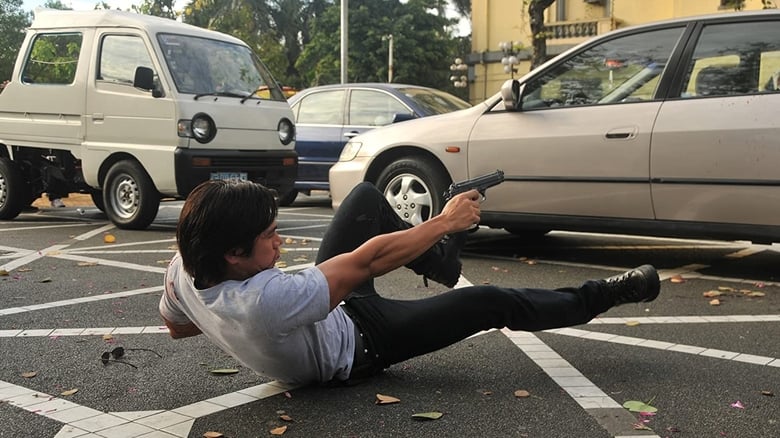 by thracian dawg
posted on 10/08/13
in
As a director of so called "women's" film; Nicole Holofcener's films may not have enough car chases and gun battles to warrant the attention of most film viewers, but her small roster of movies is pretty decent: Enough Said; Please Give; Friends with Money; Lovely & Amazing; and Walking and Talking.

The set-up? A politician places an ambitious young investigator on the case of a high level drug dealer who was gunned down in broad daylight. Getting this off the front pages and off the books quickly is of utmost importance, plus getting tough on crime always polls well with his constituency.

The film definitely has a kind of complexity at the beginning but the story is essentially, a pair of wet boys; Tatang (Joel Torre) and Daniel (Gerald Anderson)

and a pair of good guys; Police Sergeant Acosta (Joey Marquez) and Francis (Piolo Pascual) working the same case, albeit from opposite ends.

Daniel the thug and Francis the FBN agent (the FBI might be a decent North American equivalent) are mentored by the older men whose emotional dilapidation seems ooze out of their cold, weary eyes. The young men are essentially mirror images; both are full of swagger and slightly misplaced in their chosen professions: ones that are rather hostile and completely unforgiving of mistakes. When Francis takes the case away from the lowly Sergeant Acosta he can't help but sneer at this desk jockey. Francis has grown up on a pile of money that has miraculously removed all the obstacles of poverty. Francis has also married well and his father in law (the politician) places his plum assignments like entries in his resume. Although he doesn't know it yet, he's being groomed for the highest levels of society, one that may even include the Presidential palace.

Likes? The snapshots of Manila from it's dark backstreet slums to it's frontstreet opulence; there's almost seamless transitions from the highest corridors of power to the lowest rat infested hovel. The casual rot is exquisite here, although the Philippines isn't quite approaching the dizzying levels of American corruption, it's clearly getting there. Sergeant Acosta doesn't seem to pay for his food or drink when he's out in the streets. Tatang is putting his daughter through law school with the fruits of his labor but he's oblivious to the actual reality of his family life. Francis' girlfriend is clearly clued in about their upper class world, but she's waiting patiently for Francis to open his eyes and get with the program.

Set decoration is important, the minor details reveal a lot. I'll point out one sequence where Daniel tools around the Filipino prison. We glimpse it's hierarchies amongst the inmates; the daily routine; the social structures but this maze within a maze metaphor reveals the utter size of the problem. And any attempt at a clean-up will be one of Herculean proportions.

At the core of this film, everyone seems to internalized the golden rule: those who have the gold ... make the rules. Which usually is only a tiny variation on the monopoly board game: when they pass go, they collect a thousand dollars, when anyone else passes go, they fork over a hundred bucks. Society separates into born winners and born losers at birth. The casual way they accept the brutality and violence of their lives is heartbreaking. Tatang explains with almost fatherly concern that if, in the future, Daniel is given the assignment to silence him: he has to take the job and he has do it well, since that's the name of the game. Tatang is probably the only person who's taken the slightest interest in Daniel in his entire life. That assignment, when it comes down, is going to be a huge problem for him.