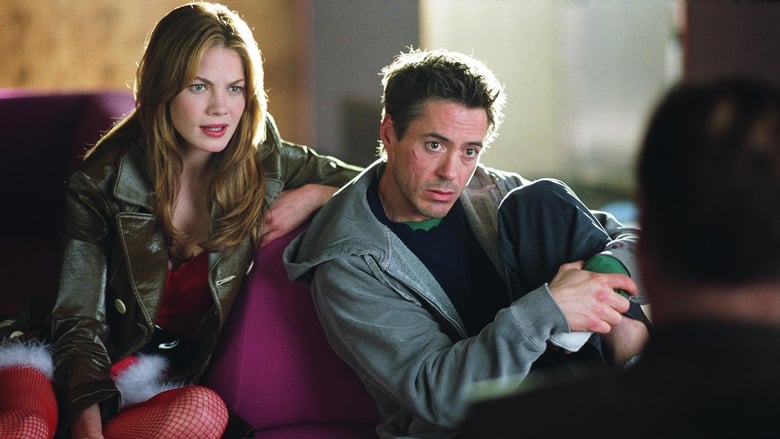 Plot - Harry Lockhart (Downey Jr.) is a petty criminal on the run from the police after a botched robbery attempt. In his attempt to escape he stumbles across a film audition and unwittingly lands the part of a private detective in a new Hollywood movie. Flown out to LA, he is teamed up with a real private eye for the experience. The investigator in question is Gay Perry (Kilmer). While attending a showbiz party, Harry meets up with an old childhood friend in the form of Harmony Faith Lane (Monaghan), now an aspiring actress. Later, on an apparently routine case with Perry, Harry finds himself embroiled in a dark and mysterious tale when a body falls into their laps. And then Harmony's little sister turns up dead of an apparent suicide. Harry is having a hell of a time in Hollywood.

I consider Kiss Kiss Bang Bang to be one of the absolute overlooked gems of 21st century cinema. One of the most underrated films of the 00s, and most certainly one of my favourites. A dark, gritty noir-comedy it is full of action, laughs and a decent detective story. It also doesn't take itself dreadfully seriously; a lot of the time it has tongue placed firmly in cheek while giving a knowing little wink to the audience. I couldn't call it a spoof however, it's way too good in its own right for that. So we'll go with a smart, knowledgeable homage.

It certainly feels like there is more than a trace of Sunset Boulevard in the film's DNA. Just as with Sunset it uses the classic noir template to satirically skewer the workings of Hollywood, presenting LA and the film scene as this sleezy, degenerate place where the only thing more f*cked-up than the people who reside there, are the parties that they throw. I love the scene where Downey attends a Christmas party whose entertainment is provided by some bizarre performance art; namely half naked individuals locked in cages and glass boxes, dressed up in various Christmas themed outfits including a slutty Virgin Mary and a naked woman dressed as a reindeer complete with hooves and antlers. I imagine it's the kind of Christmas party Lady Gaga might throw! Harry's fish out of water bemusement at the ridiculous excesses of Hollywood is a treat to behold. And his speech about girls in LA is priceless. While through the presence of Monaghan's aspiring actress, the film is able to take plenty of swipes at the film business and its treatment of aspiring actors; how it just casts them aside once they've passed their prime or in the case of Harry, misleads him purely as a ploy to cast Colin Farrell. Indeed the story even opens in a similar fashion to Billy Wilder's 1950 classic; the camera underwater, shooting upwards to the obscured figure of our antagonist as he launches into a narration that will explain how he ended up here. So yeah, kind of like Sunset Boulevard; a contemporary, expletive-laden Sunset Boulevard.

The humour on show is a bit of a mix. While it largely veers towards the very dark and offbeat, it also has a tendency to deviate off into the realm of slapstick. The laughs are generated mainly as a result of Shane Black's cracking script which is overflowing with wit, invention and sharp one-liners. It presents Kilmer and Downey with dialogue that just drips off the tongue and they certainly make the most of it, with their back and forth banter being one of the film's absolute strong points. It's not all about the dialogue however with the film also setting up a number of set-pieces and visual jokes, though admittedly they may not be to everyone's tastes. For me the absolute epitome of these sequences has to be the Russian roulette scene and Harry's dreadful grasp of maths! You'll know what I'm taking about if you've seen it. The film's only slight misstep perhaps comes in the form of the film's post-modern narration which is provided by Downey. While it does contribute a number of laughs throughout the running time, I do feel that occasionally it comes off as trying just a little bit too hard to be 'cool.' Just occasionally.


Film Trivia Snippets - Originally the film had the rather brilliant title of “You'll Never Die In This Town Again” /// In the early stages of production Hugh Grant and Benicio del Toro were considered for the lead roles. While Johnny Knoxville was actually set to star as Harry Lockhart before being replaced by Robert Downey Jr. /// Robert Downey Jr. was still in the early stages of recovering from his problems with alcohol and drugs, and as a sign of solidarity Val Kilmer refused to drink a single drop during the entire production. /// The phrase 'kiss kiss bang bang' originated in the 1960s as overseas slang for James Bond films, coined either by Japanese audiences or an Italian journalist. The moniker proved so popular that John Barry actually recorded a title song for Thunderball titled “Mr Kiss Kiss Bang Bang” but the producers dropped it at the last minute. It was popularised by film critic, Pauline Kael, who used it as the title of her 1968 book of reviews. She chose it as the phrase was “perhaps the briefest statement imaginable of the basic appeal of movies.”
Having been a pioneer of such films in the late 80s and throughout the 90s, who better to recognise and send up the conventions and clichés of such fare than Shane Black. With the likes of Lethal Weapon, The Last Boy Scout and The Long Kiss Goodnight he had regularly delivered stories that lurked in dark shadows but were still able to deliver a series of thrills and laughs. So while he knows his way around this type of tale, he also knows how to send it up. So he creates a parody of the buddy-cop movie, and makes Kiss Kiss Bang Bang a movie which knows it's a movie; complete with breakings of the fourth wall, manipulating the action on screen and a self-conscious commentary on the ways of such films, such as the studio's desire for a happy ending which sees numerous individuals return from the dead, even Abraham Lincoln! Black had also proved over his career that he was possessing of a great talent for writing dialogue, and based on his work up to this point, had you been going to draw up a shortlist of writers ideally suited to tackle the noir genre; and the sharp, hard boiled, mile a minute dialogue it entails, then he would have most likely been right up there at the top of the list.

And while he may be poking fun at the genre and the conventions of film in general, he actually does deliver a very strong mystery in its own right, complete with all the requisite twists, turns, red herrings, bluffs and double bluffs you could ever want. Black clearly mired himself in the works of Raymond Chandler and the like, with each day given its own title, each taken from titles of Chandler novels - “Trouble is My Business”, “The Lady in the Lake”, “The Little Sister”, “The Simple Act of Murder” and “Farewell, My Lovely.” While he may have had a lot of experience of the genre as a writer, as a first-time director Black deserves a lot of credit for how he handles the action. The film goes out on a strong note thanks to an excellently conceived action sequence that comprises of car crashes, shoot-outs and a runaway coffin. It's not merely a great piece of entertainment to close out the film however, it is also an emotionally engaging sequence, putting the characters in peril and making us care about them.

Robert Downey Jr and Val Kilmer make for a tremendous double act, their chemistry and interplay responsible for so much of the film's enjoyment. It was the best performance that either actor had given in years. With his sharp delivery, quick wit and sly persona Downey really does feel like a perfect fit for the noir genre. And it doesn't require much of a leap to get from Harry Lockhart to Tony Stark; the character that really completed his career resurrection. They share the same kind of arrogance and the same flaws, with Harry just being a poorer, more twitchy version. It's also not hard to see the film and Downey's character as an attempt at making a personal amends. When Harry is admitting to his criminal past and talking about how he always messes things up, you do feel for a minute as if he has dropped this whole acting charade and is really just being himself, laying himself bare. It's a great, hilarious showing from him. Though Kilmer runs him very close in terms of laughs. He's exceptionally entertaining as Gay Perry, a very forthright and to the point individual, very comfortable and up front with his sexuality. Kiss Kiss Bang Bang helped set Downey on the road to his eventual comeback as a superstar. It's just a shame that Kilmer didn't follow suit. In fact what the hell did happen to Kilmer? I feel it's been years since I've seen or even heard about him. Michelle Monaghan also impresses as Harmony, and while I've never particularly found her to be so previously or since, but she is damn sexy in this. The scenes with her wearing her little Santa outfit with the red fishnet stockings?

Conclusion - I find that Kiss Kiss Bang Bang works on a few different levels. It entertains as a delightfully dark comedy, intrigues as a noirish mystery, bites as a Hollywood satire, delights as a buddy flick and works as a deconstruction of the genre. Oh and a couple of final thoughts. The film is further heightened by a great jazzy score from John Ottman, and an immensely cool animated title sequence in the vein of vintage Saul Bass. To this day I feel that it still remains a bit of a cult gem; hopefully one day it will grow to become a much wider appreciated film. I just love it!
» More about Kiss Kiss Bang Bang
» More reviews of Kiss Kiss Bang Bang
» More reviews by JayDee