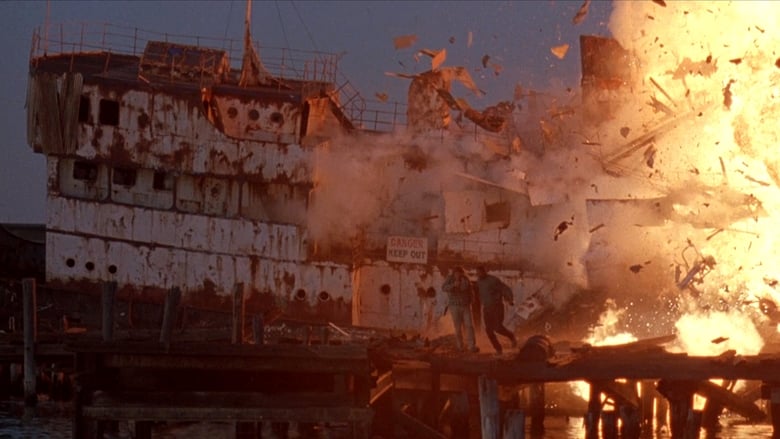 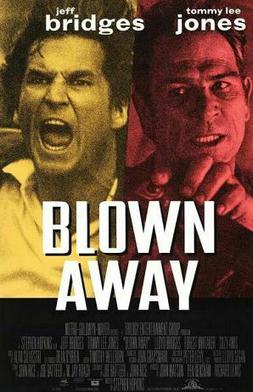 Jeff Bridges is Jimmy Dove, a Boston bomb disposal expert who always plays the hero and disarms explosives, usually against orders. But when a mad bomber with a link to Jimmy's past begins to target other members of the Boston's bomb disposal unit, Jimmy and his Irish adversary Ryan Gaerity (Tommy Lee Jones) begin to play an explosive (get it?) game of cat and mouse across the battleground of the streets of Boston, culminating in a fiery showdown.

In case you didn't know or haven't read any of my past reviews or comments, action is a genre I never tire of, despite being, along with horror, a catergory of film that rarely brings new stuff to the table. And against it's negative critical reputation (28% on Rotten Tomatoes), Blown Away is a film that has been on my watchlist for quite a while. When you've got a '90's action film, I'm always interested. But when you've got Jeff Bridges and Tommy Lee Jones, two fantastic performers that aren't really synonomus with the genre, I am pretty damn intrigued.

Stephen Hopkins isn't a name that comes up often in the discussion of great directors, but of the films of his I've seen, he's a fairly competent director. As he did with the solid sequel Predator 2, Hopkins is aware of what kind of film he is making and of the fact that his material is pretty much more of the same. With that in mind, he tries to make what should be a standard experience as entertaining as he possibly can. He gives audiences what they want, a thrillride, and he does it in spades with Blown Away. Plenty of fight sequences, explosions and chases, Hopkins perfectly captures the fun and tension of the premise with some interesting - and enjoyable - camerawork. The script, on the other hand, is nothing new. All the characters are cliches and stereotypes and a lot of old, tired action devices (one last job, enemy from the past, reckless hero with a long suffering wife and kid) are abundant here.

What really brings the film alive are the two leads. Jeff Bridges delivers one of the weaker performances of his career, but it just shows even a weak Jeff Bridges performance is still watchable. He puts in a bit of effort to his conflicted hero, taunted by a horrific past, and Bridges, as always, is as charismatic and likable as ever. Tommy Lee Jones, meanwhile, can play these kind of roles in his sleep. This time, he puts on his Under Siege routine, just with an Irish accent. His performance is pretty much worth the price of admission, whether he's drunkenly dancing and singing along to U2 or performing a makeshift puppet show with a couple of live crabs, he always lights up the screen whenever he's on.

I wasn't "blown away" by what was on display here, but it proved to be a pretty entertaining actioner, with the benefit of two great actors in the leads and a director who knows what he's doing. It'll never break into "best of" lists, but if it sounds like your kind of thing, give it a go. Chances are you won't be disappointed.