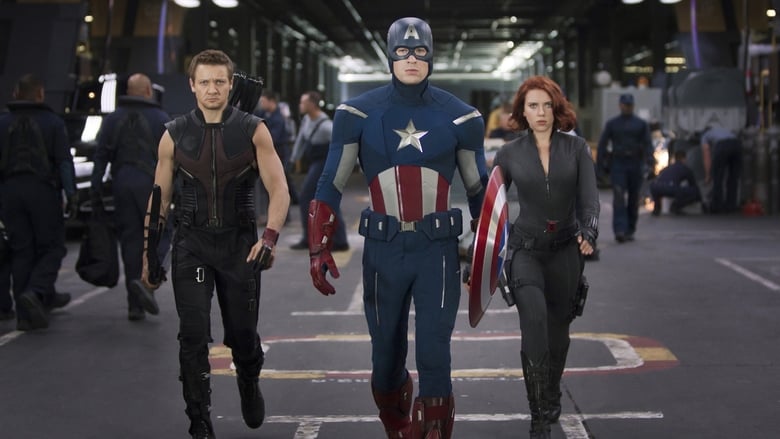 
Plot – The Cosmic Cube. A device of immense power. And it's just been stolen by the God of Mischief, Loki. In conjunction with the alien race, the Chitauri, he plans to pulverise and enslave the Earth. No one man can stop them. And on that day The Avengers were born – to fight foes no single hero could withstand.

First off let me say that score will in all likeliehood drop. While I'll still probably keep it around the 4.5/4.5+ level I don't think this is one of my fabled 5 out of 5 films. So why that score just now? Well because it's still fresh in my mind and I'm still in the middle of geeking out: having a nerdgasm I believe the kids are calling it these days!

If like me you were left with a longing to slit your wrists following Nolan's bleak, nihilistic Dark Knight then this is the prefect antithesis. It's bright, bold, colourful, funny. What a 'comic book movie' should be in my eyes. As with the best superhero movies to date (Iron Man, Spider-Man 2, X-Men First Class, Batman Begins etc) the reason this is such a roaring success is that it really does feel like a comic book brought to life. There are so many moments that if you just froze them you'd swear you were looking at a panel in a comic book

I'll be up front and admit to being a massive worshipper of the superhero, both in comic book and movie form. And as far as comic book movies go this is just about the holy grail; getting Iron Man, Thor, Captain America, Hulk etc all in one movie? Didn't think I would ever really see that. So this will be more the thoughts of a comic loving geek, than the review of a respected critic (me respected? Yeah right!

) Perhaps it won't do much to get the respect of the high brow posters on here that I strive for at times, but I always aim to be honest about my likes and dislikes.

When it comes to selecting directors and actors Marvel Studios have made some interesting and inspired choices (Downey, Favreau, Branagh, Shane Black etc) and they have made another in Joss Whedon. While it may have seemed the perfect choice to comic book geeks like myself it was still a bit of a risk. After all his top TV shows Buffy and Angel; while landmark, touchstone shows were not exactly world beaters in terms of ratings. His last two shows lasted for just 14 (Firefly) and 26 (Dollhouse) episodes respectively before being axed. And his other foray onto the big screen, Serenity, grossed just $38.9 million worldwide; coming up just short of its $39 million budget. So handing him the reigns of a $200m budgeted film still must have been a big call, and one that other studios may have balked at.

And Whedon has more than repaid their faith in him. An incredible amount of credit is due to the script he has penned. While it's never going to go down as one of the all-time classics, or be nominated for any awards, when you take into account the potential obstacles and pitfalls for me it will most likely be one of the most impressive accomplishments of the year. As well as being full of witty dialogue it performs a terrific juggling act that not only gives every character their moments to shine, but does so in a way that doesn't feel forced or shoe-horned in. It feels like they all belong and that they are all a vital element of the Avengers, they aren't just pointless additions to stoke up the fires of fanboy excitement. Whedon is able to find time to give just about every character their own arc and story; whether it be trying to find their way in a modern world (Cap), trying to prove they truly are a selfless hero (Iron Man) or trying to control the beast within (Hulk).They entertain individually but also have a number of entertaining conflicts/relationships between themselves. Captain America and Iron Man have a bit of a bickering, odd couple relationship; Tony Stark and Bruce Banner connect over their intellect and the darkness within that they are striving to control; Agent Coulson (played winningly and with great comic timing once again by Clark Gregg) has a connection to just about everyone and is instrumental in bringing them together.

Perhaps predictably the character who benefits most from Whedon's involvement is Scarlet Johansson's Black Widow. Whedon's penchant for a strong heroine allows her to shine. While the character brings over the kick-ass element she showed in Iron Man 2, there is a lot more to her this time out. She is smart, cunning and more than feels like a worthy addition to the team. So much so that she's gone from a character I wasn't all that bothered about to someone I'd really like to see get her own film. Marvel have strayed from the safe superhero ground recently with epic fantasy (Thor) and period adventure (Captain America), and I would be really intrigued to see an espionage thriller from them. Oh and as someone who's never really been overly fond of Scarlett Johansson I found her extremely sexy with her red hair and kick-ass attitude.

The acting throughout is a big success. It's quite clear that these guys feel comfortable in the characters, and have benefited greatly from already playing and learning their character in their individual movies. Downey is still excellent, pretty much a perfect fit for Stark as he throws out one caustic line after another, frequently at the expense of either Captain America or Thor. And he would arguably be the runaway star of the piece if it wasn't for the surprise of The Hulk. Of all Marvel's A-list characters he has had the toughest ride on the bigscreen, with two entries which didn't exactly set the world alight. And they are now onto their third actor in less than 10 years. And this time they seem to have struck gold. Mark Ruffalo uses his immensely affable charms to bring heart to the character of Bruce Banner, meaning that when he transforms into the rampaging green monster we still care about him. While Stark still has the wittiest lines, Hulk is able to deliver some of the film's biggest laughs. And as with Black Widow my interest is now piqued to see another Hulk film

The opening stretch of the film actually takes a little bit of time to really get going as all the individual parts of the team are assembled. I was beginning to get a little apprehensive that it just wasn't going to live up to my high expectations, but those fears were soon allayed as soon as the team starts to come together and the film moves up a few gears. From then on Whedon just delivers one thrill after another, one great moment after another. And I'm just glad cinemas are in darkness, otherwise people would likely just have seen me with a silly grin on my face for most of the film

These days it takes a lot to really stand out in the action stakes. Thanks to the incredible special effects available to seemingly anyone and their mother we've grown accustomed to cities being destroyed, whole new worlds presented to us and battles of epic scope. That's why it's such a treat to have some incredible moments of action here which still wow and astonish. It's achieved through some creative set-pieces and the fact that we care for the characters. Highlights include the early Captain America v Thor v Iron Man battle and some of the scenes aboard the Heli-carrier. However everything is overshadowed by the jaw-dropping finale set in New York as the Avengers finally unite as one to take on Loki and the alien menace, complete with some freaky metal, serpent-like monstrosities. Oh and another occasion were the special effects shine is in Iron Man's donning of his suits, just so cool.

There are some flaws of course, though they were of the expected kind really. Flaws that just come with the territory of doing an Avengers film, at least unless you go for three and a half/four hours. Trying to rope in so many characters there are always going to be those that are sacrificed, and in this case Hawkeye is arguably that sacrifice. Under Loki's spell he is sidelined for a large portion of the film, though even he is able to recover towards the film's climax and ooze a bad ass charisma. Another complaint you could level at the film is the actual plot which is amongst the most basic you are likely to see and could have come from any 12 year old comic book fan. Loki teams up with some aliens to conquer Earth and the Avengers try to stop them. That's pretty much it. And yet it doesn't really matter. It's enough to get the team together and from then on it's just a marvellous display of energy, imagination and invention; all delivered by some excellent direction from Whedon. Oh and the aliens themselves don't exactly have any depth, feeling like little more than cannon fodder for our heroes. So thankfully Tom Hiddleston continues his fine form from Thor as the villainous Loki.

Earlier on this year I remarked how the little underdog Chronicle had laid down an admirable gauntlet to the big superhero names to come. Well The Avengers has risen to that challenge and then some, and now it's over to Spidey and The Bat. After this however to those two I wish them luck, they're gonna need it.

Think I'll leave it there. I could just keep going for another while yet but I think that's more than enough, and I'm not sure how many people will even have made it this far!

Conclusion – Whedon has delivered an incredible and rousing success of a superhero flick, full of energy, colour and a clear fondness for the characters. Is it the pinnacle of comic book movies? I'm not going to say that this early on. But it is certainly up there at the peak along with the likes of Iron Man, Batman Begins and Spider-Man 2. As well as being one of the best pure summer blockbusters of the century alonngside the likes of the first Pirates of the Caribbean, Rise of the Planet of the Apes and Star Trek
» More about The Avengers
» More reviews of The Avengers
» More reviews by JayDee