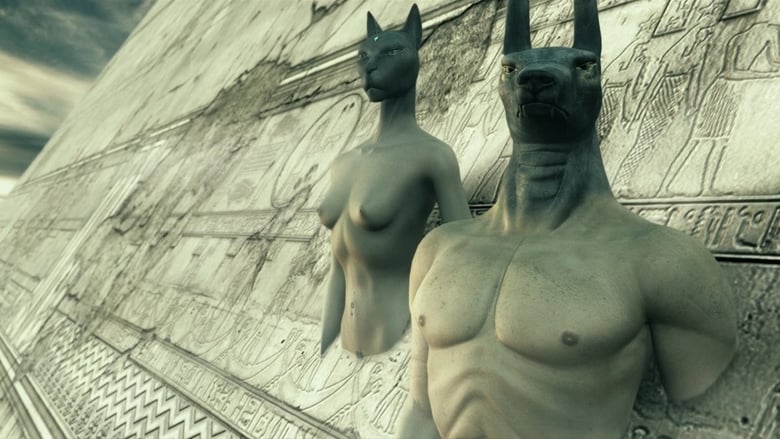 Nyc year 2095. A floating pyramid has emerged in the skies above inhabited by
ancient egyptian gods. They have cast judgment down upon Horus one of their
own. Now he must find a human host body to inhabit & search for a mate to
continue his own life. There is a series of gruesome murders going on where
all the peoples heads have exploded, turns out that if Horus tries to inhabit
your body and your not a match then that is what happens to you. Horus
finally finds a fitting body of a man who has just escaped from prison, during
his accidental escape Alcide Nikopol (Thomas Kretschmann) loses one of his
legs which Horus replaces with a steal beam he magically turns into a
perfectly good replacement. Having a steal leg turns out to be not such a
great thing as it weighs a ton and that's the catch, as long as he agrees to
help Horus then Horus will make sure Alcide can move just fine and the weight
will not bother him if not then he will have to drag his leg around for the
rest of his life.

Horus uses Nicopol to find the girl that he has already selected, Jill (Linda
Hardy) is a blue haired blue skinned hot girl. Her character I really didn't
understand all that well, she is some kind of alien that was brought to Earth
for some reason that I did not understand. With the help of Horus's magic
Nikopol is able to seduce Jill so that Horus can use her to procreate, this is
another part I didn't understand but for some reason Horus needs to have a
child and it has to be with Jill. The bad part of using "magic" to seduce a
woman is that when it wears off in the morning she does not remember anything
and needless to say she feels extremely violated, luckily Nicopol calms her
down and is able to form a friendship with Jill that blooms into something
more throughout the movie. This is a really interesting movie and beautifull
movie as the characters and movie are half live action and half CGI, I
definitely suggest this movie to anyone that likes the bizzare and unusual.