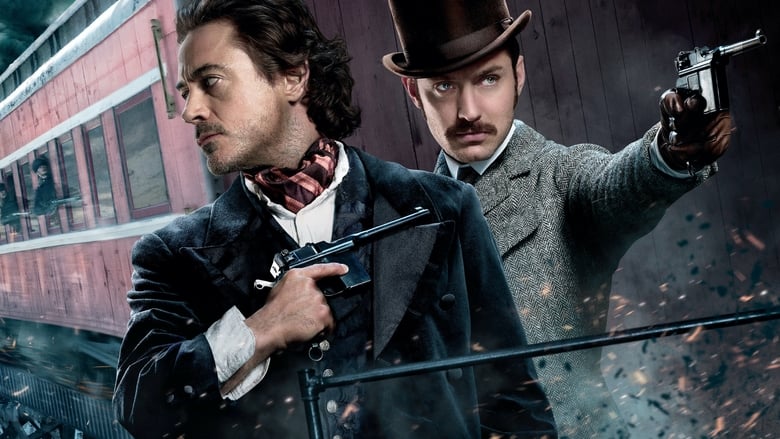 Sherlock Holmes: A Game of Shadows

by Thursday Next
posted on 12/27/11
in
Sherlock Holmes: A Game of Shadows

If you were to sit down with a check list of Thursday's favourite things to see in a movie, you'd probably come up with something a lot like Sherlock Holmes: Game of Shadows. Costume drama? Check. Slick editing? Check. Cross-dressing? Check. Mild violence? Check. Humorous banter? Check. Ballroom scene on black and white tiled floor? Check. I could go on. All it's missing, really, is that it's not a musical. (Guy Ritchie, if you're looking for ideas for the third movie...)

This is not to suggest that it's the best film I've ever seen, but I've said before that the Sherlock Holmes movies are *my* comic book movies. I care about them the way other people care about Spiderman or Batman or other things ending in man. I love the original books, I like Sherlock Holmes in just about every incarnation I've seen and I thoroughly enjoy the way Ritchie has reinvented them as action thriller movies while retaining the core of the Sherlock Holmes we know. They're not serious, intelligent films, but nor are they completely dumb brute strength wins out movies either. Sherlock Holmes wins because he outwits his enemies with brains. How great is that?

Game of Shadows suffers slightly from the inevitable sequel disease of having to be bigger than the original and at times it overreaches itself a bit. More guns, more slo-mo, more everything (less Irene though). Here, instead of the great detective solving crimes in foggy old London, Holmes and Watson dash madly around Europe attempting to foil bombings and avert a war. It's less Sherlock Holmes and more a gay steampunk James Bond. Not that that is really a bad thing, but there is a decided lack of detecting which is a shame. We know whodunnit from the start, the only question is what he's going to do next.

I'm attempting to make this a coherent review in actual sentences rather than just a series of exclamations (Stephen Fry! The Reichenbach Falls! Torture! Moriarty!). Suffice it to say that everyone in it is brilliant. Stephen Fry's moments are some of the film's funniest, for which he is forgiven for being, on occasion, a little over the top. Jared Harris is a good counterpart for Downey's manic Holmes as the Napoleon of Crime, Professor Moriarty. Noomi Rapace isn't given a lot to do, and her story isn't really wrapped up in a satisfactory way, but the focus remains where it should be, on Holmes and Watson.

Both Robert Downey Jr and Jude Law are brilliantly entertaining (and believe me, I never thought I'd be so enthusiastic about any performance of Law's, but he seems to have found his niche in these movies). They have great chemistry together and the rapid-fire bickering with a side order of being willing to die for each other is back in full force. The obstacle of Watson having got married to Mary Morstan and retired from his crime-fighting life is gotten over pretty quickly in a hilarious train sequence, as she is pushed to safety by Holmes, leaving Watson free to pursue one last adventure before settling down into married life. At its heart, the film is really a love story, with Holmes going to extreme lengths to protect Watson, the person he cares about most, from Moriarty's deadly plans; despite his unhappiness over his best friend's plans to leave him and get married. There's a bittersweet note to Downey's performance, beneath all the humour and shooting, and a couple of really touching and poignant moments.

It looks gorgeous, it's very funny and very entertaining. I can't say it was a masterpiece, but there were times I laughed out loud in the cinema just from the sheer joy of it and I think that's something to be valued in a film, certainly.