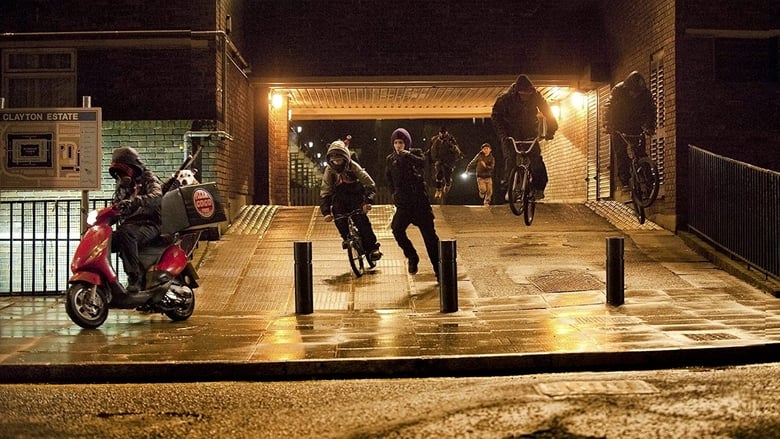 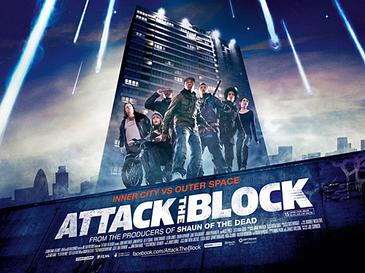 Attack the Black is a British comedy, about aliens that invade and attack... The block. The block being a neighborhood in south London, it's pretty much run by street gangs.

Now this movie is pretty straight forward. One alien comes down, these street punks kill it. Then a lot of aliens come down, they try to kill the street punks. But these aren't aliens with like gun, and like smarts. These aliens are animals that pretty much go on instinct. They're really furry, shadowy figures, that run on all four, and have like glow sticks for teeth. All in all, i thought the aliens looked pretty cool. And i always like an alien movie, where like calm and every-day people haft to fight these things. But the problem in this was that the people weren't common every-day people. The first thing you see the main characters do in this movie, is rob a chick at night point. And after that i was like "Why would i care about you guys?".
Yeah, at a point in the movie, the chick they robbed forgives them, it makes you feel a little better. But still, there's like 1/2 an hour before the movie ends.

However, watching human beings who grew up on the streets take on shadowy wolfs (or something), it's always cool. and i gotta give it up for the uniqueness of it. And there were actually some pretty cool kills too. A lot of the movie was them regrouping and coming up with a plan. I just wish they would have taken more guns and just wasted more aliens.

So the movie has a really specific target audience. If you like it, you'll like it. If you don't, you just won't. And has unrelatable characters. There's no way i can relate to people who just mugged a chick at night. I'm just that kind of person, i don't like that ****.

But in the end, i did have a good time with the movie. I did respect it for what was. An alien invasion movie, made on a small budget.