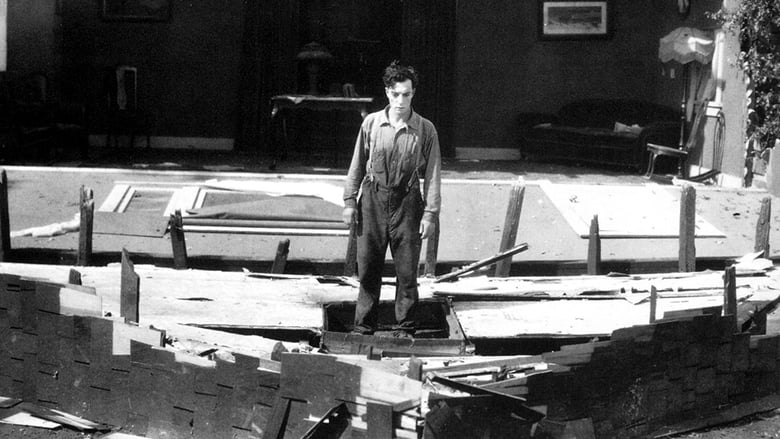 Thoughts: Here is a movie that features some of the worst carpentry on screen in exchange for a few of the best laughs. I won’t get into the argument over Buster Keaton being an actor or stuntmen, because either way he’s damn entertaining and his physicality sucks the viewer right in. In this movie, which seems is more concise and personal than the chase actioner The General, Keaton plays a young man back from college to visit his estranged father’s steamboat. The comedy staple of having an aloof bumbling idiot play opposite the irritable and ever-aware straight man is honed or perfected in this film. I might say this makes an excellent father’s day picture too.

Playing the father in Steamboat Bill Jr. is Ernest Torrence and the two make a great comedy duo. Keaton at barely 5’6” tall is no match for Torrence at 6’4” and the film caters to the size difference. A lot of comedy comes from the son disappointing the father, who expected him to be manly and the ensuing archetype of getting him to “grow a pair.” There’s also quite a bit of under the radar dry humor – even if it is in bad taste – about the father’s fears his son is homosexual. This doesn’t seem like an issue that would be a gold mine to harvest laughs from, but the scenes play out well if one doesn’t take it too seriously. Despite making valid points, the film hardly seems a commentary, but I could be wrong.

As it turns out Bill Jr. is not gay, at all, and is in fact preoccupied with the daughter of a rival riverboat owner. Shades of Romeo and Juliet; sure. I can’t fault the movie for not developing their relationship as it’s not the point, though it is easy enough to accept the pair and desire for each other despite each of their father’s wishes. What father doesn’t want to live through his son. Another topic that could be the makings of a drama, played for fun and laughs. I can go on about how enjoyable and fast-clipped this film is as it speeds along.

What does it speed along to? The most imaginative and outrageous action sequence I’ve been witness to in a silent movie. The last 15 minutes of the film is an extended “destroy the set” action scene, which works. Keaton sustains the comedy well beyond the point that our minds tell us the film should give up the gimmick. How many structures do we need to see tumble down? Not enough. The carnivalesque pandemonium has houses falling upside down, sinking buildings, cyclonic wind, and trees uprooted flying in the air. It’s beyond surreal, you just have to watch it.

Best Scene: I could easily pick the finale, but I won’t. In my mind the best scene comes in the introduction of the film when Bill Sr. is waiting for Bill Jr. to arrive and makes a bit of a jerk of himself. The preposterousness that everyone would be wearing the identifying carnation is silly and the dry humor doesn’t let up as Bill Sr. mistakes a black man for his son to his shock. Who cares if it is slightly racist, this thing is not meant to be taken seriously. These early moments all set up the polar extremes of father and son later in the film. It’s a gag that functions clockwork.