by Holden Pike
posted on 2/20/11
in
I saw five movies yesterday. Could have scheduled in a sixth, but even I need a break every now and then. That brings my total to thirty-two so far. Geeze, only twenty-four reviews behind. 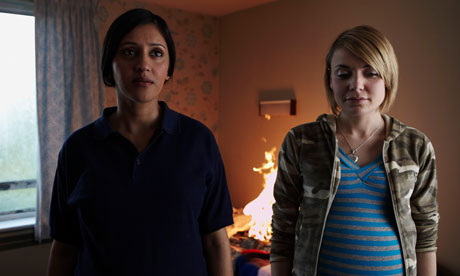 Rather ingenious and innovative documentary, bringing its subject to life in a very compelling way. Andrea Dunbar was a playwright who came out of the low income projects, writing sometimes barely veiled autobiographical dramas about herself, her family, and daily life on the Brafferton Arbor estate, known ironically as The Arbor, the title of her first critically acclaimed play in 1980. In addition to plays, her success got a screenplay, Rita, Sue and Bob Too (1986), produced as well. Despite her celebrity status in the theatre world, her life continued to be fueled largely by alcohol, spending more time in pubs than anywhere else. Before the drinking could get her, she died suddenly at the age of twenty-nine, due to a brain hemorrhage. Besides leaving a handful of respected plays behind, she also had three children by three different men. Their lives on the same Arbor were not much better than their mums, especially her eldest, Lorraine, just eleven when Andrea died. But Lorraine's poison wasn't alcohol, instead the illegal drugs that came to dominate that neighborhood in the 1990s, eventually becoming addicted to heroin and turning to prostitution and a series of abusive relationships to feed her habit.

The look at these two young women and their struggles is presented in their own words, in Andrea's case mostly from a vintage BBC interview as well as stagings of selections from her plays. Lorraine, as well as Andrea's other two children, various family members, and others who knew them, are interviewed in the present day. But rather than a series of static talking heads, director Clio Barnard, making her feature debut, has made an odd and rather wonderful choice: actors are cast in the various roles and they lip sync to the audio interviews. It probably shouldn't work, but it does. As a viewer you're aware this is a gimmick and not "real", but the stylized artifice is dynamic, theatrical, and makes them truly characters in their own drama.