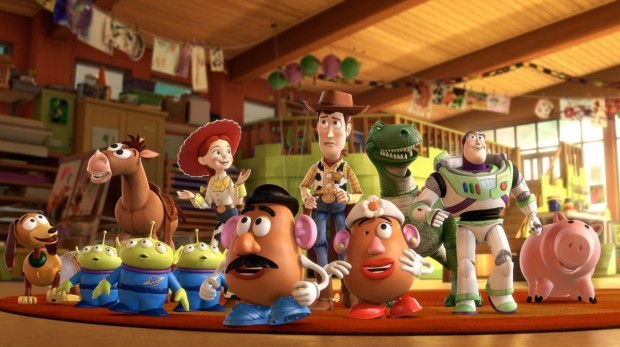 I feel pretty safe saying no-one knows Toy Story like me. As a kid it was one of the few movies I watched, and I watched it again and again and again. Sometimes two to three times in a day. Going back to the original now I can direct sound queues with my hand and lip sync Randy Newman. Re-evaluating the Toy Story movies as an adult, it's too easy to criticize the go-for-joke, slapstick nature that shoves the stories from point A to B. In previous Toy Story movies, character intension's are buried, and the same goes for the third chapter.


Toy Story 3 fully recognizes the previous two with countless references and nods to it's predecessors. It even follows the same escape formula, although the stakes a lot higher now. Andy's long done playing with plastic toys and is heading off to college, so the few characters still remaining are looking at what's next. This is where motivations go from curious to muted. Woody is tirelessly devoted to Andy. Everyone else seems content with the day care which they arrive, without a single thought of that old stupid owner. Of course the day care is torture chamber where little kids destroy and pound the crap out of anything, with a new half-baked villain running things.


There's a lot of things it does right and an equal amount of wrong. It's too afraid to leave the formula of the last two, anyone sitting in the theater should see the ending coming before it starts. The relationship between Buzz and Woody which strung everything together, is not here at all. Through an ingenious reset button, Buzz is back to default space ranger mode. This should have been the heart of Toy Story 3. Woody knows Buzz a lot more than Andy, he's been through a lot more, and the friendship is obviously a lot stronger. So it's baffling how fast he leaves Buzz, possibly forever.


It's well worthy to enter as an equal, to the canon. More sophisticated in it's animation and themes than the first two, while sharing most of the same motions that we've seen.