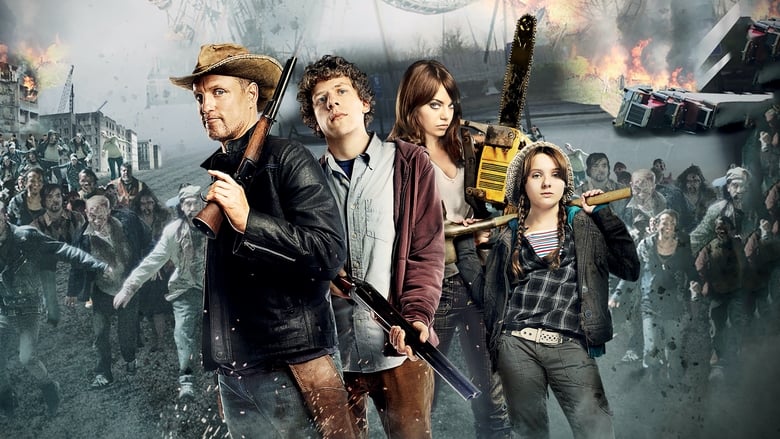 This film is obviously going to draw comparisons to Shaun of the Dead and for good reason. These are the two big zombie spoofs. However, Shaun of the Dead came first and Zombieland has to live up to the standards, and unfortunately it doesn't quite make it to those standards.

The story is pretty typical survive a world full of zombies. And Jesse Eisenberg has a set of rules to do that, and we hear about a lot of them. He meets up with Woody Harrelson and then Emma Stone and Abigail Breslin. It breaks one of his rules, but of course, without breaking that rule, there wouldn't a be a ton of story. They are all trying to make it somewhere and just survive. There are a bunch of odd little jokes that they run together into the story, but it isn't as good for jokes for Shaun of the Dead. Jesse Eisenberg and Woody Harrelson aren't as good as Simon Pegg and Nick Frost.

Visually this is a gore fest. They do it well having a lot of fairly realistic gore, but it is fairly over the top. They set up nice shots for catching the splatter. They go through a wonderful set of locations and ending up at Billy Murray's place was a nice touch. And the sound track for this film was good. They use a number of high tempo rock songs, which fits well for the zombie slaying.