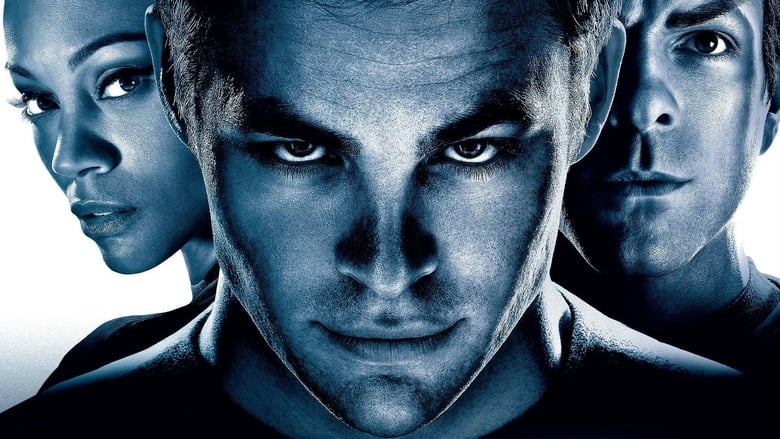 There's quite a few places i could start this review, the nature of the original, the mythos behind the films, the "re-imagining" and so on. But let's start with Star Trek- The Original Series. Essentially, Star Trek was a perpetuation of American ideology, the American Dream in space, contemporary cultural radicalism and so forth, featuring an array of stereotypes- black, Asian, Russian, alien, Scottish and American- all becoming part of a multi-cultural/planetary idealism. These days, Star Trek is embedded into us as an important aspect of culture but also as perhaps the pinnacle of nerd-dom. Now we've reached the "nerd" factor of Trek it's worth mentioning the mythos of the movie series, as Simon Pegg himself states in Spaced- the odd numbered Trek movies are always the bad ones, a rule which until has been arguably true.

Moving on, the film as i'm sure we all know, is not only a prequel but more a 're-imagining'. It takes all the characters of The Original Series, recasts and slightly adapts. It's an interesting take, considering part of the cult popularity of Star Trek is relating to Kirk's iconic portrayal by Shatner, down to his very speech pattern. Swapping him for a little known actor is probably the first hurdle of the film, considering the core audience of the film are some of the most biggest types of fan you can get. Luckily Pine doesn't attempt to directly emulate Shatner's mannerisms, rather capture the essence of the character, rather well. Sylar similarly does a good job with Spock, which i'm not sure whether or not to commend since he's characteristically stoic, either way it borders uncanny. Bones was probably the one that had me most worried, Karl Urban basically beats people up in the films i've seen in him so playing a disgruntled Doctor seemed like a big departure from that. His take on Bones is the closest to the original, uttering his catchphrase "my god man" maybe a few too many times. Harold (of Harold and Kumar) is also an interesting replacement coming from a comedic background and does the little he has to do well, despite my difficulty removing him from Harold. Uhura is perhaps the most changed character, with more to do than just be the token black on the bridge, now she's dating Spock. I'll quickly go to Simon Pegg who is perhaps most out of place in the film, especially considering his sentiments regarding the film mythos. He's a bit shaky, especially the accent but maybe because he's eating his words.

The film itself covers Kirk from his turbulent birth to (brief) rise through Star Fleet and encounters with those who go on to be under his eventual command. As the nature of prequels go, the focus is on the origins of characters and how they get to be in the places we are know them from. Every character gets their 3 minutes, maybe a bit too literally for some. On the whole it's one of the more successful prequels. However, it does suffer some of the inherent problems, the outcome will always be inivetable. Considering the plot contains time travel, a bit more focus could have put our heroes into some actual impending peril, unfortunately we never get an real sense of threat. The obligatory red shirt crops up and routinely dies but there's not any sense of tension driving the film. It's getting from point A to point B and more or less relies on the dynamics between Kirk and Spock; the resolution of which is a bit of a cop out that i won't spoil. The new character is villian Nero, who like in many origins stories is more a less a pop-up baddie just in it just enough to give the film some momentum. Bana hams it up well but there's not the chemistry you'd expect between charismatic Kirk and bad guy. Heck, there's not even a real confrontation. Again, there's no real emotion and considering how the story sets up personal involvement for both Kirk and Spock, there's little reward to it.

There are a nice amount nods to fans, i was pleasantly surprised at the extent they used Captain Pike (who was the Captain from the pilot before Shatner got the gig) and some other references- particularly nice to them using original costumes. The film has some fantastic effects and once you get past the weirdnes s of seeing familiar characters replaced with new faces, it's one of better Treks. It's just a shame the plot tries a bit too hard setting up these characters that it forgets to impose a real sense of threat onto them. Despite hesistations i came away pleased with what they'd done, whether it was necessary or not, it was a good way of distancing themselves from the somewhat stagnant name, whilst retaining a familiarity to itself. Problem is, the Trek brand will forever be tainted by it's associations with nerd-dom and as exciting and well used as the massive budget is, i think it's down to the marketting to draw in non-fans opposed to what's on screen as i doubt that will convert non fans. Even if JJ throws in the monster from Cloverfield and aliens who look like they belong on Star Wars. Personally i hope this is a stand alone prequel and they don't continue on, it was a novel exercise and good summer blockbuster but i can't wholly buy into the new actors playing old characters.