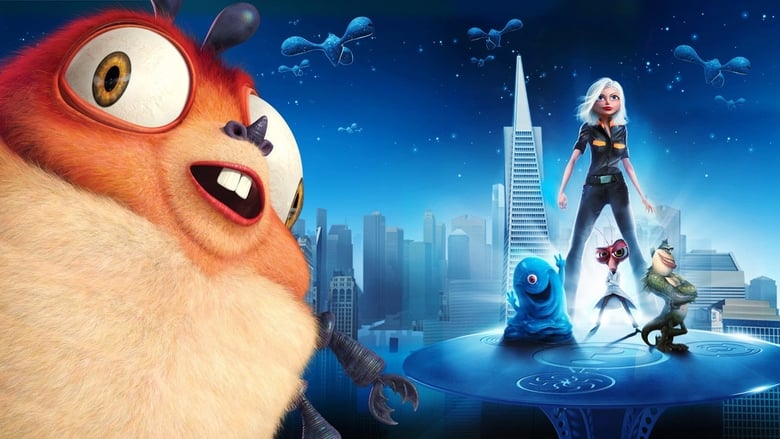 Synopsis: When California girl Susan Murphy is unwittingly clobbered by a meteor full of outer space gunk on her wedding day, she mysteriously grows to 49-feet-11-inches tall. The military jumps into action and Susan is captured and secreted away to a covert government compound. There, she is renamed Ginormica and placed in confinement with a ragtag group of Monsters: the brilliant but insect-headed Dr. Cockroach, Ph.D.; the macho half-ape, half-fish The Missing Link; the gelatinous and indestructible B.O.B.; and the 350-foot grub called Insectosaurus. Their confinement is cut short, however, when a mysterious alien robot lands on Earth and begins storming the country. In a moment of desperation, the President is persuaded to enlist the motley crew of Monsters to combat the Alien Robot and save the world from imminent destruction.

First off, I will say that this was my first ever 3-D movie experience. However, the simple fact that it was 3-D doesn't change anything.

I think back to when Toy Story was released and the impressive work the Pixar guys did on it. Dreamworks really hit the nail on the head, story wise, with Shrek and while I don't believe that M vs A was as good as Shrek or even Shrek 2, it wasn't as bad as say Space Chimps.

There were a few things that had me chuckling, but I didn't find there to be "gut-busting" laughs throughout. Naturally, any scene with B.O.B. present was a hoot because of the simple fact that Seth Rogen, regardless of whether or not you see him, can just make the dumbest comment funny. The conversation he has with a JELL-O mold certainly guarantees a few laughs. Of course, one thing I couldn't help but get over was how much I couldn't get used to Hugh Laurie talking without sounding like House. That didn't take anything away from my experience, I just tend to forget that he's not originally from America.

I mentioned the 3-D factor earlier and like I said, I didn't feel it really made the movie any better, nor did it take anything away. In fact, I'm more blown away with the entire concept of 3-D movies. More on my thoughts regarding 3-D films can be found here.

Overall, it wasn't a bad movie, but it wasn't a big achievement for Dreamworks either. Great voice cast and the first attempt at making "contact" will have you laughing.