"Get busy living or get busy dieing"; these are the very true words spoken by Andy Dufensne played by Tim Robbins in The Shawshank Redemption. I think this was probably my first rewatch; actually now that I'm thinking about it, I think it's my second rewatch. This viewing was the best viewing of it yet though, I don't know what it was, but it just seemed to hit me more this time than either of the last two viewings did. Maybe it's just because of the time of my life I'm in, even though it's only been like 6 months since when I first saw it, the words in it just seemed to actually speak to me more this time. Frank Darabont's writing is, IMO, the best thing about The Shawshank Redemption, and that's really saying something because of all the incredible acting that was included in this. Frank Darabont turned Stephen King's short story into one of the best movies that I've ever seen.

One thing about the acting that just really seems to stand out to me; is that even with the very huge cast, I don't think there's a single weak performance. Every actor was on top of their game for this one, namely Tim Robbins, whose words just seemed to speak to me. He just really engrossed his role, like I said in the last sentence, even though it was Darabont's writing it's Robbins that really sold the lines. Of course after Robbins comes Freeman, whose naration just flowed throughout the movie, which another one of the great things about The Shawshank Redemption. Out of all the characters though, after Andy and Red, my two favorite characters were Brooks and Tommy; whose played by James Whitmore and Gil Bellows. Just something about their characters really seemed to stand out to me, it's actually after Brooks naration after he got released from prison that just really pushed his character over the top for me.

The senery was just so vivid to me, especially the shot of Red on the fields going to the tree. Thomas Newman's score was what made some of the scenes what they were though, he got the tone down perfect and it just really made the movie for me. Honestly, I have no idea why I ever took this out of my top 10 because I'm sure it deserves to be in there more than some of the movies that I currently have in there. After I get to some rearanging I'll try and get it back in there; I'm not completely sure if it is going to make it back in there though. I'm just hoping I'll be able to fit it in there. This movie is nothing short of extroadinary. 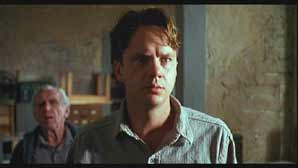