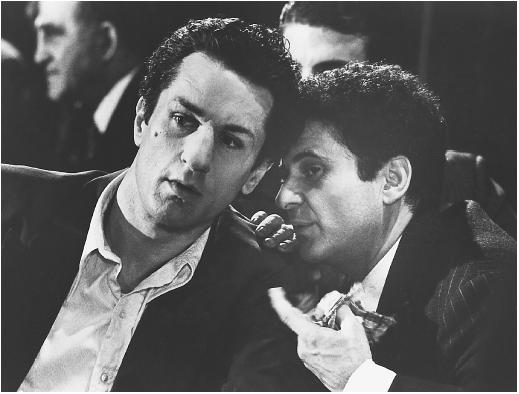 Now I think this is a movie that everyone should check out sometime, it’s a film that I think anyone who loves movies has to see. I sadly just saw it for the first time last night though, I wish that I would’ve seen it before last night, but at least I got to see when I was still young. Because if I didn’t I would’ve been upset that I would’ve waited so long to see it. Even if you’re not a fan of Martin Scorsese you should check this out sometime, because, to me at least, this really didn’t feel like all of the other Scorsese movies that I’ve seen (which are sadly only Taxi Driver, Goodfellas, and The Departed). I’m actually surprised that I loved it so much because me, I’m not too big a fan of sports movies, most of them just tend to be average to me, except for the few like this and Million Dollar Baby. I actually find it funny that my two favorite sports movies are about boxing, maybe it’s just that I like boxing more than any other sport, I don’t know.

One of the things that make this movie so great though, is the score for it. I could tell right from the very first scene, which is the opening credits that it was going to be a great movie, just from the theme to Raging Bull. The fact that Martin Scorsese chose to shoot it in black and white just gave it the feel that it was supposed to have, the feel that it was supposed to be a movie from the 40’s or 50’s (at least that’s the time frame that it took place in). The cinematography for this was just great though, they sure did a great job with it in this.

Robert DeNiro and Joe Pesci make a great team together though, I actually thought they were related in this one, but then again I also thought they were related in Goodfellas. They’re just the perfect team of actors to work together, they need a new movie with them together, to see if they still do great together which I’m sure they do. I really loved DeNiro’s character at first, but towards the end though I just didn’t like him, I think you were supposed to hate his character more as the movie goes along. Pesci’s character seemed to really care about DeNiro’s character though, even though DeNiro was just plain mean to him in some of the scenes. One thing that made this movie so special was that it really made it seem that it was based on a true story, and I don’t think it actually was. At least that I know of, Goodfellas was made the same way though.

The only thing I didn’t like about this movie though was the ending, I mean the movie started going downhill once La Motta retired from boxing, but the last 15 minutes or so just got really boring. But then when the credits started rolling again, I loved it just as much as when he was boxing because the amazing theme started playing. I’m serious, I think this may have my favorite movie theme of all-time, it’s just so inspiring, and I’m actually listening to it right now. Personally I think with a re-watch this may even make it into my top 5, because I know I loved it more than Pulp Fiction, I just have to make sure it stands up as great with a re-watch as Pulp Fiction does. I’m actually sort of upset now that I didn’t wait to do my top 100, because I now really want to include this in it, but I can just include this next time I do my top 100. I think everyone needs to check this out eventually, because this is a must see to anyone who’s a fan of movies, it definitely deserves the number 4 spot on AFI’s greatest 100 movies ever made.