by Sawman3
posted on 9/03/08
in
A quick note before I start in here: Could someone please change the thread name to "TwIsTeD ReViEwS... from the Mind of Sawman3". I've tried to change it myself but... no go.


Hamlet 2. A film that promised comedy heaven, and certainly appeared as though it could deliver just that, with perhaps a dollop of genuinely good acting smack dab on top. Going into the theater to see this film, I was near rigid with anticipation. Woe was I when I realized, perhaps twenty minutes in, that Hamlet 2 was neither comedy heaven nor a healthy helping of good acting. In fact, I realized, Hamlet 2 is one of the most disappointing films of 2008 so far.

But before we really get going, allow me to backtrack a little and give those of you who aren't familiar with the film some basic background. Hamlet 2 is directed by Andrew Fleming, director of such films as Nancy Drew, and was written by Andrew Fleming in conjunction with the proud (rightly) co-writer of Team America: World Police and South Park: Bigger, Longer & Uncut, Pam Brady. Brady is also the writer of myriad South Park episodes and uncredited producer of Team America: World Police. If the choice for director/co-writer does not inspire great enthusiasm, than the writer certainly should. Steve Coogan plays the lead role of a failed actor-cum-high-school-drama teacher. Coogan has a number of respectable roles under his belt, having acted in, among other things, Tropic Thunder, Curb Your Enthusiasm, and Hot Fuzz.

So after reading the preceding paragraph, you're probably thinking that this reviewer must be off his rocker: nothing possibly could have gone wrong with this movie. Well, prepare to have your socks knocked off, Mr. Jump-to-Conclusions.

Hamlet 2's biggest mistake lies in trying to draw out a variety of jokes and punchlines that are either: A) Visible from miles away, or B) Unsuited to anything except children's daytime television. For example, a little past the midway point of the film Coogan slams his hand in a door and then jumps around like a fool before having his hand removed and slumping against the door in agony. The sequence is too long, and the gag wasn't funny to begin with.

Then, of course, there's the story itself. Which is pretty good. But it sure doesn't look it here. The writing was absolutely butchered by Coogan and the two terrible actors that played the roles of Coogan's two most devoted students. Coogan over-acts when he should be subtle, and then proceeds to be subtle when he should act absurd. Picture Jim Carrey at his worst (A.K.A. rock-bottom), and you'll get the idea. This results in the story feeling bland at best and at worst apathetic. 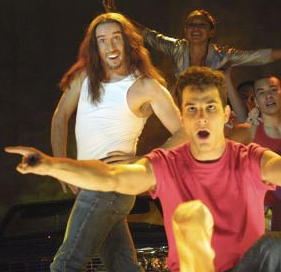 Coogan has nothing to grin about.

I will grant Hamlet 2 this: it has some truly hilarious moments. In one scene, Coogan explains (with a stupid grin on his face as per usual throughout Hamlet 2): "Just because they're Latinos it doesn't make them gang-bangers, got it?" Such off-beat un-politically correct humor is exactly what Hamlet 2 needed to be great, and it needed it in large quantities (good acting would also have been a plus). Instead we get a few brilliant moments interspersed with childish humor and moronic and repetitive body-acting.

There's not much to say. Hamlet 2 has all the promise of Christ at the moment of his birth and offers all the fulfillment of diet soda. Don't waste your time on it. If you do, it's not a film that you will remember longer than it takes you to ridicule it in front of friends.