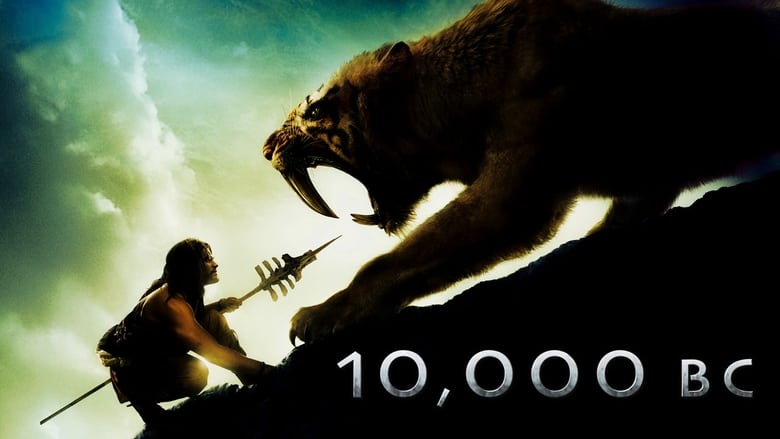 I get most of the complaints about Roland Emmerich, I do. I guess down deep I'm just a bad judge of film or maybe I'm not smart enough to only like good to great movies. Emmerich's latest foray into the CGI laden special effects movie brings us 10,000 B.C. I have no interest in trying to sway people here, I'll just share a few thoughts and you can either watch it or don't. First off I didn't "love" the movie but I didn't "hate" it either. I did want to like it more and sadly there just wasn't enough good stuff to out weigh the bad. I didn't think The Lion the Witch and the Wardrobe was good the first time I saw it either. But I did enjoy it a good deal more the second time. I may be just a "bad movie sucker".

I still enjoyed parts of the film, I love a love story no matter how bad the movie is and this flick did have one, sort of. Our Hero with his lovely white teeth spends a large part of the film in pursuit of his bride to be who was captured in a raid by "demons with four legs". If this sounds a little familiar, it is. Apocalypto is basically the same film except I would say that Apocalypto is really quite good and 10,000 B.C. is basically a rip-off.
Why? The little things I guess, like better acting and character development and oh I don't know maybe they could have tried some alternative form of "caveman" language. The outsiders seem to be speaking in a different tongue (with sub-titles) than our friendly little tribe that the film is centered around. And yet they (our tribe) speak perfect English, its a mild complaint and I certainly don't expect 2 plus hours of grunting like we get in Quest For Fire but maybe they could have at least tried it out. I think it would have given the movie its own "feel" if you follow.

Instead we get the CGI treatment and the vague prophecy references that we all know just mean that we are gonna receive a "happy ending" if we just stick with it. And most of the time for me that's fine, I'll watch this again sometime just probably not as often as Apocalypto, it needed more heart and less fluff. So, in closing this one goes on the shelf with Troy instead of next to Braveheart. But that's Ok too, the Sci-Fi channel needs movies too and this baby will be fine on there.