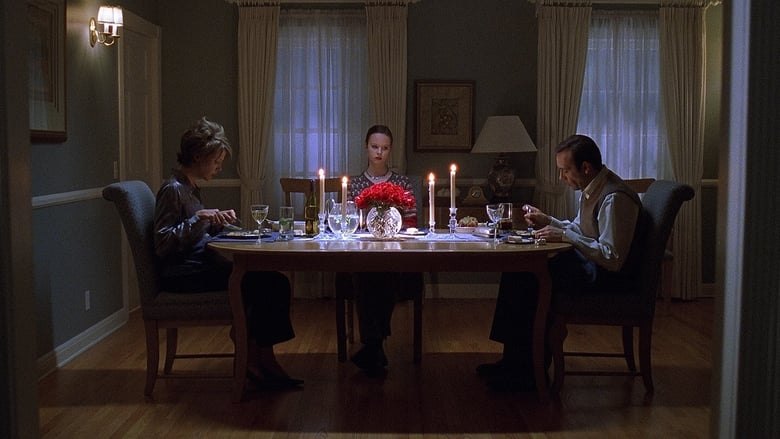 Plot : Lester Burnham (Kevin Spacey) suddenly hates his current life and breaks all the rules he lives his life by. Meanwhile the people around him only further push him to another realization.

Story : Lester Burnham narrates his story of how he gets murdered - it starts with him going through a normal day of what he is accustomed to : but for him it's his last - the next day he starts to change things to his sudden will. Meanwhile his wife Carolyn (Annette Bening) who is obsessed with "success" , which is her career for her : is thrown off by his strange behavior and she also goes on a life changing mood. Their daughter Jane develops a hatred for them as well and falls in love with the new neighbor : who has a need to film everything he thinks is beautiful.

There seems to be two sides of what people can relate to : Fight Club or American Beauty , while I can relate to both - I'm more on the Fight Club side. Both films with heavy themes of anarchy and attempts to further understand life : though I feel how American Beauty blends in some comedic/quirky situations just subtracts from the power of the film.

Visuals : Some great moments and some foolish looking moments. I enjoy how the neighborhood of the house is very into the movie : with the neighbors house actually being across the house and it's used pretty well. As for something dumb looking like the fantasy scenes with Lester and Jane's friend - really detract from having any visual "beauty". One thing that makes a big boost here though is the great soundtrack.

Synopsis : Always gets me to think about it's characters , the kids are the ones I have the hardest time relating to : but being unable to comprehend them is also a good point for this interesting film.