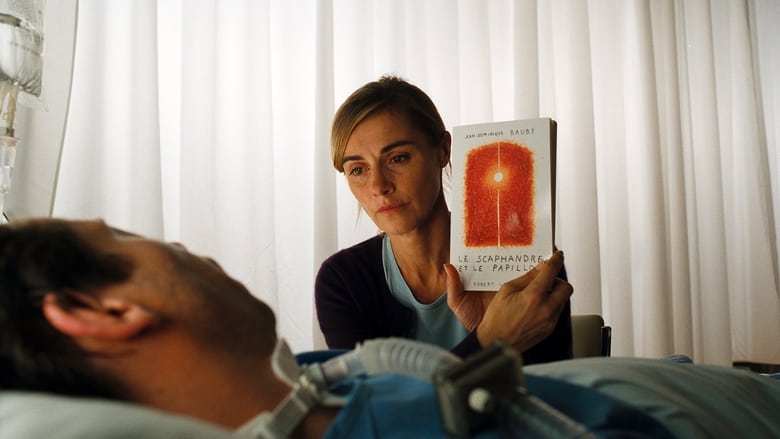 by Holden Pike
posted on 1/10/08
in
Saw this one last week but never got a chance to type up any sort of review...

The Diving Bell and the Butterfly (2007 - Julian Schnabel)

Amazing and ultimately inspiring true story adapted from the slim memoir of the same name by Jean-Dominique Bauby. Bauby was 43 and a successful editor for the French fashion magazine Elle, a man who had a very extravagant lifestyle. It all came to a screeching halt one December day when he suffered a massive stroke that initially put him into a coma, but when he did wake it was into a living nightmare. The stroke effectively destroyed his brain stem, which left him almost 100% paralyzed. The only movement he had in his entire body was the blinking of his left eye. It's a rare and horrible fate known as "locked-in syndrome" where the patient is left with their mind and consciousness completely in tact but with little or no way to communicate. You can't even breath or eat for yourself, you're a prisoner in your own body but completely aware of that sentence.

The film starts as he wakes in the hospital, and for much of the first thirty or forty minutes, save for some flashbacks here and there, the camera is Bauby's perspective. One of his therapists does have an idea how he can communicate, even only able to blink a single eye. She rearranges the alphabet by frequency of use (in French) and then reads off each letter in sequence, "E S A R I N T U L..." until she comes to the letter he wants to use, which he signals by blinking a few times. Then start again, "E S A R I N T U L O M D..." until the second letter and so on, until a word is formed, then two, then a whole sentence. Dull work, but rather ingenious. And finally Bauby is able to communicate! His first phrase is a simple and understandable "I WANT DEATH". But eventually he decides to write an entire book about the experience, which he completes shorty before his death about a year after the stroke.

Pretty incredible stuff, and the screenplay adapted by Ron Harwood (The Pianist) and direction of painter turned filmmaker Julian Schnabel (Before Night Falls, Basquiat) are able to use many of Bauby's own elegant thoughts and words directly from the manuscript, but also flesh out the larger story of his life in his relationships with his father, his ex-wife, two young children and his girlfriend. As Bauby says the stroke robbed him of everything except his memories and his imagination. While much of the character is revealed through voice over and his subjective point-of-view, Mathieu Amalric (Munich) does a fine job as Bauby, in the flashbacks and dreams showing us the vibrant if selfish man who was and when we do get to see him in his post-stroke state the blinking shell that remained. Max Von Sydow has only a couple scenes as his father but he's excellent and Emmanuelle Seigner does very good work as the abandoned wife who does her best to care and comfort somebody she was rather angry and disappointed with up until the moment he became locked in his own body. Marie-Josée Croze is the stand-out among the hospital staff, but everybody in the entire film is well cast.

The questions about mortality, regret and ones own essence and identity Bauby pointedly asked himself during his ordeal are all well examined and beautifully brought to the screen in the film. It's a fate you wouldn't wish on your worst enemy, but what Jean-Dominique Bauby had to share from it all is an amazing story.