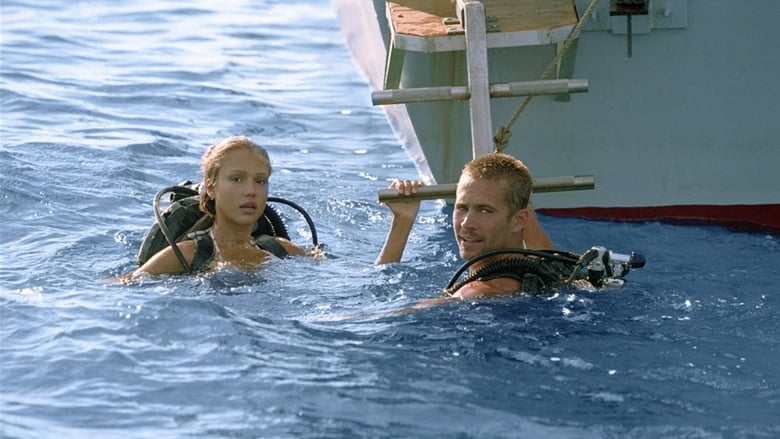 I recently saw 2005's poorly accepted Into the Blue on TV not too long ago and was surprised at how much fun I had watching it and how much I thought it was better than I expected it to be. About a month later which was two days ago, I saw it again and was glad I still enjoyed it just as much as I did the first time I saw it. What surprised me was that when I went on the net (rottentomatoes.com, imdb.com, etc), I found that the movie received overall poor reviews. I honestly could not figure out why it was recieved so poorly because to me, Into the Blue is one of the best and entertaining underwater thrillers you will see.

For the sake of this review or for this part of the review, let's consider Into the Blue to be an action film which many would argue is. Action films, or atleast most, rarely have a strong narrative. Into the Blue however has a solid narrative that flows very well and does not rely on the action to drive the story. Into the Blue is very much character driven more so than driven by the backdrop the film falls upon. The characters in the film have substance to them and have desires, feelings, and intuition. Each characters also is forced to make decisions and choices that later affect much of the plot. Character's choices affect what the next scene is, not an event that takes place, which for an action movie, is rare.

Each character is well developed, realistic, and the writer doesn't follow many cliches. The "good" characters make realistic decisions and even out of character decisions, in a good way. Choices are what decides the outcomes of events and situations and many of the choices made by the "good guys "aren't always the "good" ones or the ones we want them to make. When something happens to a character, you can trace the outcome of that character to a choice another character made half an hour ago. The characters have to stop and weigh the outcomes, consquences, and benefits of each path they choose to take. With this, not each and every scene is an action scene. There are scenes where a character must think of what he or she should do which makes the narrative much more solid and helps the flow of the film. You really cannot predict the next scene in the film simply because the scene depends on the characters themselves. This all adds realism to the film.

With not following many cliches, there are a few surprises in the film and John Stockwell mixes it up with alot of the action scenes. Drug dealing enemies, finances, coast guards, the main characters themselves and sharks all present problems to the characters in non-cliched ways and in non cliched order. Yes, there are sharks in this film and one of them affects the plot in a rather large way. When this said situation happens, the audience is surprised. It's rather satisfying and you ask yourself "did that really just happen." Furthermore, there is a twist towards the end and even though the audience could see it coming from the beginning, it is played out satisfyingly well.

The action in Into the Blue isn't your typical action movie...well, action. Stockwell balances an equal amount of action between the actual treasure hunting scenes and the "fighting the baddies" scenes. The treasure hunting scenes are very engrossing and interesting. All the scenes underwater are great and keeps us wanting more of them. The action outside or rather above the water is great as well and surprisingly more bloody and grisly than we expect from a PG-13 rating and a summer Alba and Walker starring film. Each action scene is filmed well and the climatic action scene at the end is very realistic and with that said, the film is overall very realistic, from the technicals of hunting treasure to the action and characters.

Jessica Alba and Paul Walker both deliver good performances as well as Scott Caan and Amanda Scott. Josh Brolin is very believable as the villian of the film and none of these characters ever seem like stock characters. Each one makes atleast one choice that greatly affects the rest of the film and each one is written well. We always want to see more of them, Alba because of her looks of course, but surprisingly, Scott Caan. Caan plays a well written character, stuck between what's good and what's bad; money and friendship. And this occuring conflict isn't cheaply done and isn't just a basic internal conflict. It's very realistic and done well. But it isn't just Caan. Alba and Walker have their internal conflicts as well and none of them are cheap, cheesy, or simple.

With all that said, I'm hard-pressed to find a flaw with this film. If anything, I'd wished it was a bit longer and a bit more fleshed out. Yes, the film is very well flowing but some scenes we wish were a bit longer, especially the scenes underwater simply because the cinematography and filming underwater is great.

Into the Blue is one helluva fun film and is more than you expect; much more. I would recommend this film to anyone looking for a solid but easy on the mind thriller. Definitly check this film out.