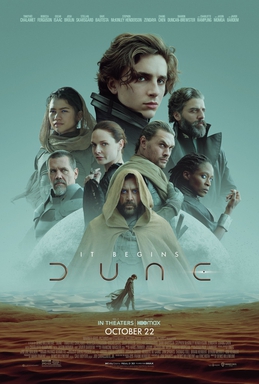 ---
Year Of Release
2021
---
Director/s
Denis Villeneuve
---
Producer/s
Mary Parent, Denis Villeneuve, Cale Boyter and Joe Caracciolo Jr.
---
Writer/s
Jon Spaihts, Denis Villeneuve and Eric Roth
Based on Frank Hervert's book
---
Cinematography
Greig Fraser
---
Editor/s
Joe Walker
---
Music
Hans Zimmer
---
Cast
Timothée Chalamet, Rebecca Ferguson, Oscar Isaac, Josh Brolin, Stellan Skarsgĺrd, Dave Bautista, Stephen McKinley Henderson, Zendaya, Chang Chen, Charlotte Rampling
With Jason Momoa
And Javier Bardem
---
Plot:
In the distant future, Duke Leto of House Atreides, ruler of the ocean planet Caladan, is assigned by the Padishah Emperor Shaddam IV of House Corrino to replace House Harkonnen as the fiefholder of Arrakis, a harsh desert planet and the only source of "spice", a valuable psychotropic drug that imparts heightened vitality and awareness to its users. It is critical for faster-than-light interstellar travel, as it grants Spacing Guild Navigators the limited prescience needed for safe navigation. Shaddam intends to have House Harkonnen retake the planet with the secret aid of his Sardaukar troops, eradicating House Atreides, whose spreading influence he considers a threat to his power. Leto is reluctant, but sees the advantages of controlling Arrakis and forming an alliance with its native population, skilled fighters known as the Fremen.
---
Review:
Slow, quiet, yet somehow exciting to watch as it unfolds.

The cons of the movie, is there's one major thing when compared to "modern standards" and modern audiences.

I say modern standards, because by modern standards, Dune suffers with not having massive action set pieces and CGI explosions, enormous battles filled with Ready Player One levels of battle scenes, and no near-misses every 7 seconds.
There's also no Avengers: Endgame third act or some kind of hero-meeting that makes the audience cheer.

And this, might well be why it was relatively warmly received by a majority of younger audiences.
83% on RT (which isn't bad by any stretch of the imagination), and some non-critique audiences felt it was too slow in pace or not actionified enough.
I think the movie suffered from word-of-mouth too. Some saying it's "overly boring", meaning other potential, possible future fans, didn't go and see it.

The other thing that may have irked younger audiences is Zendaya's involvement.
The movie was seemingly heavily marketed with her face on it... yet she's in the movie for a plum-total of around 4 minutes, and has maybe 3 or 4 lines of dialogue.
I saw some reviews from younger viewers saying they went into the movie because of her, and were annoyed she's barely seen.
So bad marketing may have marred the movie's credentials a little.
---
It's a shame, because, well, because of the pros:
Dune is not meant to be... that.
Don't let word-of-mouth stop you seeing this movie.

Dune is also considered something akin to LOTR... unfilmable.
Yet Denis Villeneuve managed it to a major extent.

When Villeneuve was announced to direct the movie way back in around 2018 or 2019, I was hesitant but excited.

See, I love Villeneuve's work. Prisoners is one of the best movies I've ever seen with its thought provoking subject and its quiet, unassumingly tight photography and dim lighting.
Blade Runner 2049 is probably one of the strongest sequels ever made too.
So when Villeneuve was penned in as director, writer and producer, I felt within myself that if anyone could do it, he possibly could.

Now sure, there's elements of the novel left out... and some of the sheer scope of the original novel feels held back in this movie... but that's kind of the case with every novel adaption ever made.

Some things must be sacrificed, otherwise the movie would be 28 years long.

But with sense of scope being filtered back, making the movie a more interpersonal viewing, there is still the sense of actual scale there.
Everything we see in the wide-shots is vast with its horizon-wide panning shots and 30 second long aerial shots of deserts and enormous structured cities, and this makes the character driven story all the more potent.

The viewer begins to feel as if they're part of this enormous world because of the small, close-up shots of the cast, backed up with those occasional shots of outer space, enormous grandios stone-built halls, and sprawling deserts.
It gives a sense of proper scale to the actual story.
And story, is something sorely missing from those "modern standards".

This is where Dune shines amongst those modern standards.
Shines like a partical of Spice, suspended and floating alone in an empty room.
---
I won't get into the acting too much... but let's just say that Stellan Skarsgĺrd literally chewing his way through his scenes is a standout performance.
Timothée Chalamet as well nails a role that I thought was out of his range. He's surprisingly good as our hero Paul Atreides.

The effects of the movie are top drawer too. Nothing in the movie feels disjointed or overly done, or done for the sake of doing it.
They use practical, green-screen, full-on CGI, camera tricks, you name it... and it all blends together seamlessly.


---
All in all, I think the tone and atmosphere of this movie before you see it, should be thought of as something like Villeneuve's other recent slow-burner Blade Runner 2049, or the even older style of movie making that gave us things like Jurassic Park.
Talky in places, experimental in others though nothing that will change the movie industry.

The movie also does its best to make Dune relatable and accessible to a new audience that might not be up on the lore of Herbert's world.
Most importantly though, the movie isn't choppy, but can feel like a small slog in places due to the 2 and a half hour running time.

It's a thought-out movie, that introduces us to Frank Herbert's world in what has now become seen as the old-school style of Hollywood novel-to-movie-interpretations.