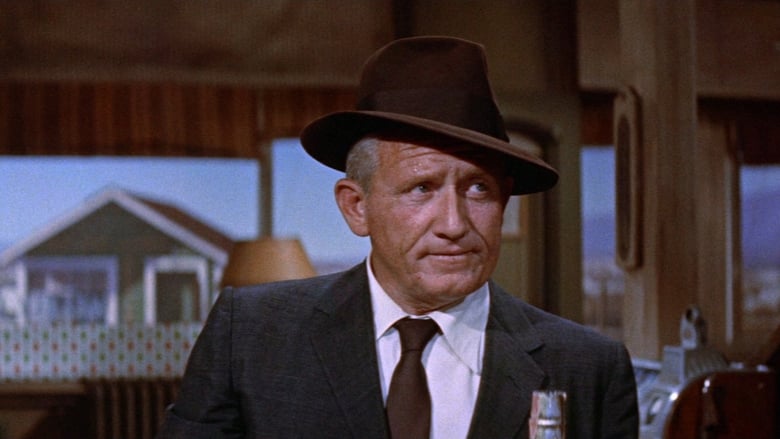 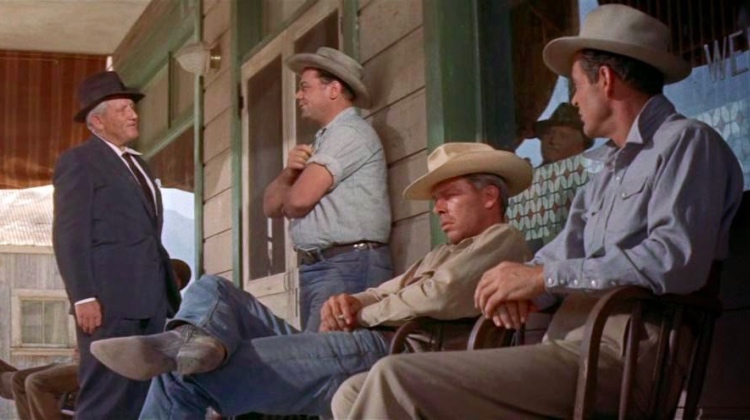 A non-descript man named Macreedy (Spencer Tracy) steps off of a train in a little Western town called Black Rock. But his arrival rattles the locals because no one ever gets off of the train. As Macreedy genially inquires about a homestead called Adobe Flats, the sweat palpably breaks out on the faces of just about everyone in town. It's clear they're hiding a secret, and it's all centered on a vicious man named Reno Smith (Robert Ryan).

I had watched this movie one time years ago when I was really tired. And while I remembered the beginning pretty vividly, the whole second half was a blur. I never felt comfortable rating it on IMDb because I didn't feel like I'd really seen it.

Well this time there was nothing keeping me from enjoying the film from beginning to end, and it was awesome.

This isn't a thriller that hinges on a mystery. Yes, ostensibly Macreedy is in town to uncover some shady deeds, but anyone with half a brain will know almost immediately what was done and by whom, if not the exact specifics. This is a thriller that hinges on just how the cookie will crumble--how will everything fall out as the townspeople topple into either turning on Macreedy or turning on each other.

Tracy may be a little old to play a recently discharged war veteran (though I guess his past is kept vague enough that he may not be intended to be seen as a soldier), but he is absolutely perfect in the role. Macreedy is virtually unflappable. When a local (Lee Marvin), decides to rattle Macreedy's cage, the man just calmly backs down. Unnerved, Marvin's character notes that he gives in a little too easy. Also on hand are Anne Francis is apparently the only woman in the whole town, and John Ericson as her brother and the man who runs the local hotel. Ryan is a great counterpoint, his masculine posturing a stark contrast to Tracy's calm and collected Macreedy.

There are also some pretty great visuals on hand. It all starts with an astonishing head-on shot of an oncoming train (the shot was apparently accomplished by having a helicopter hover in front of a train and then running the train backwards, then running that footage in reverse). Several shots establish very well just how isolated a rural desert environment can be. It makes the threats to Macreedy seem all the more probable.

I really enjoyed the exploration in the movie of what happens when something bad occurs in a small community in which the perpetrator has a lot of power. There are people who know what happened, and people who don't exactly know what happened and want to keep it that way (including the local sheriff). Things quickly become a "with us or against us" situation the minute Macreedy steps off of the train and starts asking questions. Even theoretically innocent moments, like Francis's character renting Macreedy a car, turns ominous as Smith warns her "That's the most expensive $10 you ever made."

All in all, a satisfying Wester-thriller.